Port of Stockton sets record for shipping in 2014 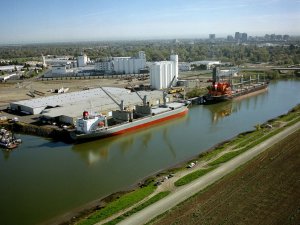 Port officials reported handling 230 ships for the full year, a surprising increase of more than 25 percent from the previous record 182 ships set in 2012. It is also up from the 181 ship visits tallied in 2013.

While shipping activity increased in most cargo categories, port Director Richard Aschieris said this week that steel imports made the biggest difference.

“We are seeing a lot more steel activity in the past year, which is probably a reflection of more construction work in the public works sector or the private sector,” he said.

While not a record, it was the largest cargo tonnage recorded at the port since 2005, when shippers moved 6.5 million metric tons across the Stockton docks.

“That year the port received more than 2.1 million tons in bulk cement,” Aschieris said.
Volume of cement fell to near zero in ensuring years due to the collapse of the U.S. construction industry and Great Recession.

Aschieris looks for shipping activity to continue to increase this year as the economy continues to improve and the port receives additional shipments of an new cargo, extra-long steel for Union Pacific Railroad Co.’s new rail welding facility in Stockton.

The Pacific Spike, a ship built expressly to carry Union Pacific’s rail from Japan to Stockton, made its first delivery last month and departed the port Tuesday.

“Next year should be better because we’ll have a full year of operation of that rail ship,” Aschieris said.

Currently, he pegs the value of cargo being handled at the port at $1.5 billion a year.
“We are continuing to grow and we are working on a number of things for the future,” Aschieris said.

The port counted 82 ships loading cargo in Stockton for delivery overseas, and 148 bringing in imported goods.

But because of the nature of those cargoes, export tonnages totaled 56 percent vs. 44 percent for imports, Aschieris reported.

This news is a total 1868 time has been read
Tags: port, stockton, shipping, sector, Richard Aschieris