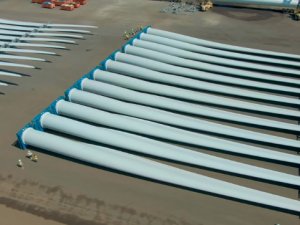 Last week, the Port of Vancouver, Washington set a new record with the delivery of the largest wind turbine blades ever to cross the pier of a U.S. West Coast port.

The shipment included a variety of components for Goldwind GW155 onshore wind turbines - blades, nacelles, generators, hubs and tower sections - and it arrived on board the freighter Star Kilimanjaro on July 22. “Wind manufacturers have kept us busy this spring and summer moving wind energy components,” said Julianna Marler, CEO of the Port of Vancouver USA. “We couldn’t do this work without incredible partnerships with companies like Goldwind, as well as ILWU Local 4, Local 40, Local 92, and the river and bar pilots who are still at work every day moving cargo."

The GW155 turbine design incorporates three 250-foot-long blades, each nearly as tall as the Statue of Liberty. They are the longest ever transported across North America, according to the port.

The shipper for this consignment, Goldwind, is a Beijing-based integrated wind energy company with 35,000 turbines and 60 gigawatts of installed capacity worldwide. It designs, builds, installs and operates its own turbines as an end-to-end EPC contractor. Its North American division has installed 26 wind farms in the U.S., Canada and Panama.

Now that the components have arrived in Vancouver, they will undergo a months-long transit northeast to Assiniboia, Saskatchewan, where they will be installed at Potentia Renewable’s Golden South Wind Energy Project. The 50 turbines at the site will generate about 900,000 megawatt-hours of electricity. When compared with coal-fired power, this is equivalent to removing the carbon emissions of half the cars in Saskatoon, the largest city in the province, according to Potentia.

Four more shipments of giant turbine components will pass through Port of Vancouver for the Potentia project this year. Thanks to its breakbulk berths, heavy lift cranes, laydown space and road and rail connections, the port has become a leader in wind turbine component shipping on the West Coast.

This news is a total 928 time has been read
Tags: Port of Vancouver USA Sets New Record for Wind Turbine Cargo