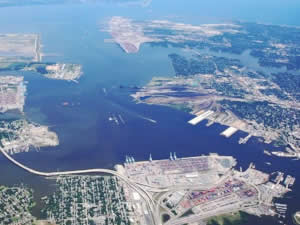 On Wednesday, the Port of Virginia announced its fourth consecutive year of growth, despite ongoing construction at Virginia International Gateway (VIG) and Norfolk International Terminals (NIT).

On Wednesday, the Port of Virginia announced its fourth consecutive year of growth, despite ongoing construction at Virginia International Gateway (VIG) and Norfolk International Terminals (NIT). The port is in the midst of a $700 million expansion at these two terminals and is limiting the volume of empty containers handled during the project.

“Our import container volume was up nearly seven percent, truck volume was up almost five percent, barge volume was up six percent and our volumes at Virginia Inland Port (VIP) and Richmond Marine Terminal (RMT) grew as well," said John F. Reinhart, CEO and executive director of the Virginia Port Authority. “We were off from our forecast, but much of that can be attributed to the effort to limit the empty container imports and exports."

In addition to the volume growth, the port is moving forward on multiple fronts to expand its capacity. It has received federal approval to begin widening and deepening its commercial shipping channels, a project that will make it the deepest port on the East Coast.

“The work being done today is positioning The Port of Virginia for success for decades to come and our success helps to drive job creation and investment across the state. We will not let up, there is still much work to be done and we are up to the task," Reinhart said.

Over the course of the 2018 fiscal year, the port marked several important milestones. It approved the purchase of four STS cranes large enough to handle ULCVs, like the 14,400 TEU CMA CGM Theodore Roosevelt, which called at the port in August. It saw the completion of a new $170 million, four-lane highway to connect freight truck traffic from the port to the nearby interstate. Construction and equipment deliveries for the two container terminal expansion projects proceeded on pace, including the delivery of 26 new RMGs to VIG. And the port rolled out a trucker reservation system at both container terminals to improve efficiency at the gates.

This news is a total 1450 time has been read
Tags: Port of Virginia Reports Fourth Year of Volume Growth