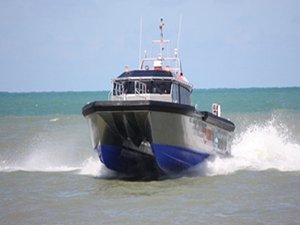 The Auckland District Court has sentenced Ports of Auckland Limited (POAL) to a fine of $280,000 for allowing its pilot boats to exceed harbor speed limits on thousands of voyages, including one that ended in a high-speed collision with a swimmer.

The director of national regulator Maritime NZ, Keith Manch, said POAL has also agreed to pay $220,000 to the family of the swimmer, Leslie Gelberger. Gelberger was struck and killed by the pilot boat Wakatere on April 20, 2017, while he was swimming about 270 meters off Auckland's popular Cheltenham Beach.

POAL and the master of the pilot boat, Grant More, both pleaded guilty to one charge each under the Health and Safety at Work Act for "failure to comply with a duty that exposes an individual to a risk of serious injury, serious illness or death." The court fined POAL about $280,000 and Mr. More about $5,500.

Mr. More admitted exceeding the harbor's speed limits on the casualty voyage, and POAL admitted that its pilot boats exceeded harbor speed limits on as many as 4,200 additional journeys over the nine month period after Gelberger's death. The count represents an estimated 99 percent of all journeys made by POAL pilot boats over this time.

“The message is less speed, less harm,” said Manch. “Ports of Auckland had inadequate systems to ensure its vessels did not break speed limits, and they did more than 4,200 times in nine months."

Waitemata Harbour has two regulated speed zones - five knots when within 200 meters of shore and 12 knots in other areas within the central harbor. On the accident voyage, Wakatere was on her way to pick up a marine surveyor from a ship, and she navigated through the harbor at a speed up to seven times faster than permitted. As she rounded North Head at the harbor entrance, she was operating at about 36 knots in the five knot zone. She exited the zone at this pace, and she struck Gelberger 10 seconds later.

At the exact position where the casualty occurred, the harbor speed limits do not apply - only COLREGS' "safe speed" rule. The crew heard a bump but did not see the victim, and they thought it might have been a mechanical casualty. They slowed, turned and retraced their track line, but did not encounter Gelberger.

Police began investigating the incident when Gelberger was reported overdue from his swim. The next day, POAL notified Maritime NZ that Wakatere might have been involved in the incident. In the investigation that followed, Maritime NZ identified the monthslong pattern of excessive speed.

Wakatere is a waterjet-powered, foil-assisted aluminum catamaran constructed for POAL in 2015. She has a top speed in excess of 40 knots, according to her designer.

This news is a total 2454 time has been read
Tags: Ports of Auckland Fined for Speeding Pilot Boats After Fatal Accident