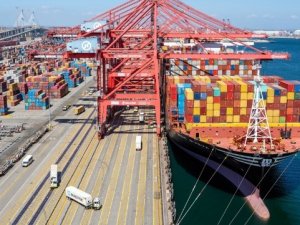 The ports of Long Beach and Los Angeles, California are not only neighbors but they also both continue to demonstrate southern California’s ability to handle the largest containerships in the world.

While port traffic might overall be impacted by the coronavirus, both ports recently set records in their container handling operations.

The Port of Long Beach highlighted that three cargo records were set in recent days reaching new levels for ship-to-shore cargo moves. A new North American record was set for the highest volume of container movements during a single call. Workers transferred 17,080 containers, the equivalent of 30,744 TEUs, during a call by the MSC Sveva. Seven ship-to-shore cranes handled at times more than 250 containers per hour to reach the record.

At the Port of Los Angeles, 18,465 containers were moved from the MSC Isabella during a single ship call at APM Terminals’ Pier 400. According to the port, this is a new all-time world record equal to 34,263 TEUs. This exceeds the previous record by 1,385 TEUs and nearly 4,000 more TEUs than the Port of Long Beach’s achievement.

One of the largest ships in the world, the MSC Isabella is part of a new class of 23,000+ TEUs sustainable container ships recently added to the MSC global shipping network. MSC Isabella’s arrival in Los Angeles marked its first time calling at a North American container port.

Approximately 400 meters long and 61 meters wide, the MSC Isabella can carry up to 23,656 TEUs. The vessel arrived at the port on June 12 and was due to sail on June 19. During the ship’s call, the ILWU operated nine ship-to-shore cranes to service the vessel.

This news is a total 1566 time has been read
Tags: Ports of Long Beach and Los Angeles Set Records for Container Movement