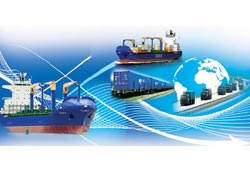 Arkas increased its turnover by 15% in 2007 and then went on to complete all of the fundamental investments it had planned for 2008. The total value of these investments raised its asset holdings to over 1.5 billion dollars. Not only were the infrastructure-equipment investments at Marport completed but two newly-constructed vessels have joined the Arkas Marine Fleet operating under the Turkish flag. With a total of 25 vessels, the Arkas contribution to the number of container vessels in the Turkish merchant marine fleet has risen to 57%.

EMES ranks 36th in the world

Founded in 2008, EMES Feedering, has taken over the feeder transportation that EMES, Arkas" shipping company, has provided since 1996. Shipping lines and feeder functions have separated to create a more effective service network. EMES Feedering transports feeder containers with weekly service between Mediterranean and Black Sea ports via its primary transfer ports.

According to the 2008 report prepared by Dynamar B.V., a market research organization specializing in the shipping sector, EMES advanced from 46th to 36th in a ranking of the world"s largest container lines compared to the previous year.

In 2008, Arkas established 5 foreign companies as part of numerous restructuring efforts aimed at developments in foreign trade and the changing transportation needs of import/export customers caused by these developments.

In addition to EMES Feedering, Arkas Italia, which is based in Genoa and provides agency services for EMES in Italy, is among the Arkas companies which began operations abroad in 2008. Overseas Transport was formed to represent Hapag-Lloyd in Ukraine and Arlogic handles logistics while Arkas Dacia is the agency for Hanjin Shipping in Romania. Arkas has offices in 36 cities and 12 countries including Turkey. Due to its extensive service network, it produces innovative solutions by meeting customer demands for comprehensive logistic services and marine transportation.

Arkas Anadolu Logistics was formed as part of a domestic restructuring in January of 2008. Arkas Anadolu Logistics serves as a customer contact point for Arkas companies that provide logistics services, offering solutions at competitive prices with marine shipping that includes rail and highway connections, as well as storage and distribution services all under one roof. In keeping with the mission of the Arkas Anatolia Project, it connects Anatolian cities to ports by offering the advantages of container transportation.

Investments in the area of logistics continued in 2008 with the Arkas Transportation fleet reaching 932 pieces of equipment with the addition of 31 truck tractors, 3 sidelifters, and 4 tipping-chassis. Ar-Gü, on the other hand, now has 501 railcars with the purchase of 30 new ones. The 40,000 m2 Arkas Orhanl? Logistics Center in Istanbul also began operations.

Arkas Anadolu Logistics has begun cabotage transport with containers due to the changes made in 2008 to customs regulations related to cabotage between Turkish ports. Loading between Turkish ports has accelerated with this procedure allowing for cabotage items to be stored, unloaded and quarantined in customs areas.

In 2008, five Arkas companies and the Arkas Marine Fleet received a series of awards for their successes related to transportation and Arkas Shipping and Marport each received awards on two separate occasions. Arkas companies were honored with the Lloyd"s List ?2008 Turkish Shipping Awards? (2 awards for Arkas Anadolu Logistics and EMES Shipping), ?Golden Anchor 2008? organized by the Maritime News Agency and Dünya Gazetesi Per?embe Rotas? (1 award ? Arkas Shipping) and the ?2007 Logistic Achievement Awards in Foreign Trade? given by the Office of the Foreign Trade Undersecretary (4 awards ? Marport 2, and 1 each for MSC Shipping Agency and Arkas Shipping).

This news is a total 8703 time has been read