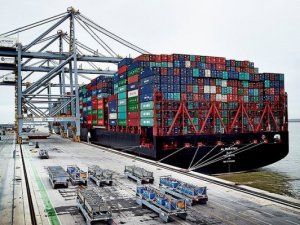 LONDON, April 12 (Reuters) – The introduction of physical customs checks following Brexit would be a catastrophe for British ports and shipping and would likely reduce the volume of trade, the head of the sector’s UK industry body said on Wednesday.

The introduction of physical customs checks following Brexit would be a catastrophe for British ports and shipping and would likely reduce the volume of trade, the head of the sector’s UK industry body said on Wednesday.

Prime Minister Theresa May has said she wants a customs arrangement with the European Union which allows trade to be “as frictionless as possible”, but few expect goods will be able to continue to move as seamlessly as they do within the bloc.

The Container Principle
Related Book: The Container Principle: How a Box Changes the Way We Think by Alexander Klose
“The nightmare scenario is actually having physical customs borders … it would be absolutely a catastrophe for the ports and for our sector,” Guy Platten, Chief Executive of the UK Chamber of Shipping, told reporters.
“You’ve suddenly got lorries stacked up, you’ve got sailings cancelled … the whole supply chain is completely affected.”

The chamber says 95 percent of Britain’s international trade is moved via ship, and the industry supports 250,000 jobs.

Dover on the southeast coast of England, Europe’s busiest ferry port, currently handles around 500 non-EU trucks a day and around 8,000 from the EU, he said.

If the EU trucks faced the same customs checks as the non-EU trucks the whole process will be slowed, particularly impacting goods such as fresh food, he added.

“The sailings will still take place, but maybe they won’t be able to fit in as many sailings as they could do before … so that will affect the business of those ferry companies and potentially the viability of routes.”

The chamber, which represents 170 firms including European companies such as Sweden’s Stena Line, Denmark’s DFDS and France’s Brittany Ferries, says the volume of lorries passing through Dover increased 150 percent between 1992 and 2015. Customs controls within the EU were scrapped from 1993.

Platten said the government needs to reach an early agreement on customs, or ensure a transition period, as checks will require new infrastructure that will take time to put in place and which British ports will struggle to physically accommodate.

He believes the British government will be prepared to apply a light touch at its border to prevent huge queues of trucks and hopes EU shipping companies will persuade their own governments to do the same.

This news is a total 919 time has been read
Tags: Post-Brexit Customs Checks Seen as ‘Catastrophe’ for UK Shipping