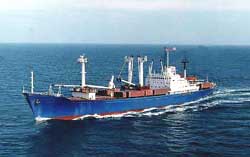 Ankara is trying to set a precedent for Turkish jurisdiction in the eastern Mediterranean through state practice, prospecting for oil 80 miles south of Meis Island.

Greek pressure to lure the European Union into a territorial dispute with Turkey over the continental shelf in the Mediterranean has led to frustration in Ankara.

Although there has been no agreement as to the delineation, several maps published by EU bodies such as EMSA and IMO, often feature Turkey"s southern maritime boundary as an EU or Greek boundary. In response to this, Ankara is trying to set a precedent for Turkish jurisdiction in the eastern Mediterranean through state practice, prospecting for oil 80 miles south of Meis Island.

A Norwegian ship, contracted by the Turkish Petroleum Corporation, or TPAO, prospecting for oil south of Meis Island, a few kilometers from Turkey"s southern coast, sparked panic in Athens last Friday. Greece pursued diplomatic channels in Oslo and Ankara to stop the Norwegian vessel, claiming the zone fell within the maritime boundary of Greece. The Norwegian Foreign Ministry issued a statement Saturday stating the vessel had been carrying out seismic research for a Turkish client, adding, "Norwegian authorities do not have the power to issue instructions to Norwegian companies or vessels engaged in activities in other states" maritime jurisdiction."

Although Greek Foreign Ministry Spokesman Yorgo Kumuçakos announced Saturday the owner of the Norwegian vessel had notified Greek authorities to advise them it had ended its activities, the vessel continued to prospect until late yesterday.

Ankara"s exodus comes at a time when Greece has increased efforts for a fait accompli, claiming major segments of the eastern Mediterranean as either part of Greek or Cyprus maritime borders, leaving Turkish jurisdictional waters unduly small. Furthermore, Greece has been trying to lure the EU to legitimize its position on its delimitation of the continental shelf, a source of dispute in the Aegean and also recently in the Mediterranean, with Turkey. Although the EU, so far, has been reluctant to take sides, Greece has had help pursuing its case because of its membership in the 27-nation bloc.

Several maps and atlases produced by European universities, marking areas of jurisdiction in the Mediterranean, limit Turkish maritime authority in favor of Greece and Cyprus. On some maps, only Antalya Bay is left to Turkey, implying larger EU maritime borders. Although these maps were produced as part of informal research, their publication by EU bodies like EMSA and references in some official EU papers has led to discomfort in Ankara. There is growing concern that Greece will increase efforts for the issue to be raised during Turkey"s accession talks with Brussels.

Turkish sources argue Greek claims over the eastern Mediterranean do not make practical sense and are against international law, as the delimitation of the continental shelf cannot be unilaterally decided.

According to experts, TPAO"s five-day scientific research south of Meis, may set a precedent for Turkish jurisdiction in the eastern Mediterranean through state practice. Ankara has put its claim for jurisdiction on the record for any future determination of the issue, experts said, adding this cautionary message by Greece was a strong one.

Turkey and Greece cannot agree on the delimitation of the continental shelf, which would enable a littoral country to exploit seabed reserves. The continental shelf is usually defined under international law as an area extending for 200 nautical miles from a country's coast, but the small space between the Greek Islands in the Aegean and the Mediterranean to the Turkish landmass, have led to disputes.