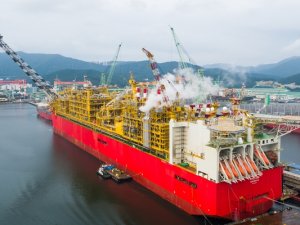 According to AIS data provided by MarineTraffic, the 300,000 gross ton vessel departed Samsung Heavy Industry’s Geoje shipyard in the early hours of June 29.

The 488-meter-long Prelude FLNG will be towed over 3,000 nautical miles by Terasea Hawk, Tereasea Falcon and Terasea Osprey, operated by Singapore-based offshore service contractor POSH Terasea. AIS data shows that the vessel is scheduled to arrive at Australia’s Browse Basin on July 30.

Once it reaches its destination, the FLNG facility will be positioned before it begins production at the Prelude gas field in the Browse LNG Basin, 108 nautical miles off the northwest coast.

The Shell Prelude FLNG facility features a fully loaded displacement capacity of about 600,000 tons, and has around 260,000 tons of steel in the facility alone.

This news is a total 1645 time has been read
Tags: Prelude FLNG Mammoth Starts Journey to Australia