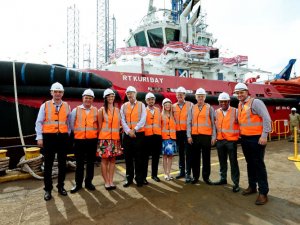 Together with RT Beagle Bay, a third ISV which was completed earlier this year, the vessels will be employed to manoeuvre LNG and LPG carriers alongside the Prelude, as well as assist with condensate offtakes, emergency response and personnel transfer, according to Kotug.

This news is a total 3885 time has been read
Tags: Prelude ISV Duo Named in Singapore