Prepare for a New Record High 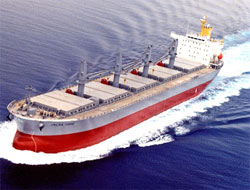 As reasoned in my previous article, the drybulk fundamentals remain healthy; in the following months, we witnessed a 100% increase in the drybulk rates.

As reasoned in my previous article, the drybulk fundamentals remain healthy; in the following months, we witnessed a 100% increase in the drybulk rates.

After hitting a new record high late in May, with BDI at an amazing 11,793 points, the market was steady for two weeks before dropping heavy in the latter half of June. In just a matter of days the the BDI plunged about 15%, once again terrifying the stock market. Since the end of June the drybulk rates have been increasing after BDI hit a low of 9,139, wich represented a 22.5% drop in only 5 weeks.

The January drop was thought by some to be a one-off, but in this highly volatile business nothing but the extraordinary is to be expected. This is drybulk shipping; volatility alert!

What happened this time?

The sudden drop was triggered by capesize vessels released into the Pacific market. This turned the short-term psychology bearish, and the charterers took a rare time-out. Chinese officials had earlier called for import restraints following the rising iron ore stockpiles.

The downturn was mainly related to the capesize market, but made a huge impact on the BDI. In the weeks before the correction the capesize rates pushed upwards outperforming the panamax rates, wich was held down by a weaker Atlantic market (farmer strikes in Argentina).

At its peak the capesize:panamax ratio was at 2.87 versus a long-term average of 1.99 between the two vessel types. In these situations you will normally see charterers splitting capesize cargoes by chartering two cheaper panamaxes. However the increasing port congestion did not support cargo splits this time. The weaker panamax market proved unable to rise with the capesize rates, and the expanding capesize market was rather easy to push down short-term. At the moment the capesize:panamax ratio is 2.07 indicating that much of the obvious downside risks are less than just a few weeks ago.It is important to note that this rate drop was related to short-term factors.

This kind of volatility must be expected both on the upside and downside, and is a part of the spot market's nature. It is not a sign of any changes in the long-term demand for drybulk cargo. As in the stock market the freight market is influenced by psychology short-term. When the utilization is 99% any minor changes short-term will have a major impact on the spot rates. The long-term time charters were in fact barely changed, opposite to what took place in the spot market both in January and June. The 1 year time charter was above the spot rate at the moment of meltdown, clearly indicating demand for vessels long-term.

After entering the traditional low season in May both the spot rates and time charters are near former record highs. As of today this still is the case, especially in the active panamax time-charter market. With the panamax spot average currently at $76,910, charterers are paying $82,000 for panamaxes 1 year with prompt delivery Atlantic and $78,000 in the Pacific market prompt.

We are currently experiencing yet another counter-seasonal trend in the drybulk market. This must be ascribed to the increasing tonne-mile demand, rising congestion world wide and the strong demand in general for drybulk cargo. The well-known challenge is however the supply side, with a record high orderbook from late 2009 and early 2010.

The supply of new buildings have proved to be less than expected so far this year. The slippage is already about 25% and delays are from 3 to 6 months even at some established yards. However there are already expectations that a few capesize vessels will be 12 months delayed, as one drybulk shipper reported earlier this year.

The increasing yard slippage will presumably continue, and possibly worsen as more pressure is put on subcontractors and inexperienced yards. Of the 15m dwt expected to be delivered in the first half of this year, an estimated 11.5m dwt have actually been delivered.

This represents a 2.9% net fleet growth, with only one handysize scrapped. Going into the second half the new-building supply is expected to be around the same level (expected 14.5m dwt). However the numbers are conflicting since most new buildings delayed in the first half will get delivered in the second half. With further slippage in the second-half orderbook there is reason to believe that the fleet growth will be about 6% in 2008. This is in the low end of the consensus from earlier this year, wich showed up to 8% without any slippage.

Towards a new record high in Q4

The growth in iron-ore cargo is estimated to be 7.5% in 2008 and steam coal growing even more at 8.5%. So far the iron-ore trade have exceeded these expectations.

The total demand growth will be higher when the tonne-mile demand is taken into account. The tonne-mile increase is hard to predict, but with the changing trade patterns the long-term trend is upward. Second half of 2007 showed a tonne-mile increase of 11%, and this trend have continued into 2008 with iron ore and coal shipped over longer distances. On the top of this the port congestion is expected to stay above 10% this year. Considering the fleet growth at 6%, slippage included, there seems to be an upside in the rates.

The high season begins in the latter half of Q3 and will presumably reach its high in Q4. This positive outlook is already reflected in some degree in the freight-future market, where both capesize Q3 and Q4 is traded above the current spot rate. Q3 will prove to be good and I expect the rates to set a new record high in Q4.

This news is a total 919 time has been read