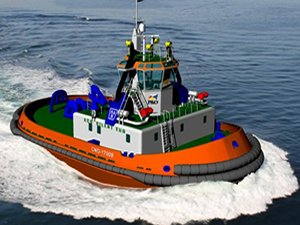 A major change in emissions regulations is coming, which will likely have a considerable impact on tug and workboat design, construction and operation

There is less than five months to go before a major change in emissions regulations has a significant impact on the tug and workboat sector.

This could lead to a rush to order new tugs and workboats before that date if owners want to avoid this restricting ruling. It is already in the minds of some tug and workboat builders, as they produce vessels that can be retrofitted with emissions-abatement technology.

Builders and naval architects have now developed designs with additional space in their enginerooms to install selective catalytic reduction (SCR) equipment for removing NOx and particulates from diesel emissions, ready for the Tier III requirements.

Neptune Marine has worked with engine manufacturers to develop its portfolio in compliance with the upcoming environmental regulations.

Damen Shipyards is already producing tugs for its clients that incorporate space for retrofits and Robert Allan designs can also be used to build tugs to IMO Tier III requirements.

US tug owners are ahead of the curve, with more vessels built in their nation’s shipyards to US Environmental Protection Agency’s Tier 4 emissions requirements, which are similar to IMO Tier III.

Some owners in Europe now have tugs on order that will comply with IMO Tier III requirements when they are delivered.

P&O Maritime Logistics has ordered a harbour tug to comply with IMO Tier III to support container ships berthing at Barcelona, Spain. P&O Maritime Logistics chief executive Martin Helweg said this tug is under construction at DP World’s Drydocks World in Dubai for delivery in Q4 2020. “We have developed an innovative tug concept for our operations in Spain,” he said.

This eco-silent tractor tug will have a pair of diesel engines with SCR exhaust-gas emissions after-treatment systems to comply with IMO Tier III. This is an asymmetric tractor tug ATT 2020 designed by Cintranaval Ship Design.

While engine manufacturers are ready with SCR additions to their diesel main engines, one manufacturer has developed engine technology that does not require SCR to comply with IMO Tier III.

It uses exhaust gas recirculation (EGR) and two-stage turbochargers on its medium-speed engines to reduce NOx without compromising on fuel efficiency.

Some owners are retrofitting existing tugs to IMO Tier III requirements. Boluda Towage Europe will retrofit tug enginerooms to comply with these emissions standards after securing a concession from the Port of Zeebrugge.

This owner upgraded Union Koala tug to IMO Tier III standards in 2019 and will retrofit Union Panda this year. In total, it will upgrade engineroom systems on six more tugboats over the next five years as part of the arrangement with the port operator.

As such, emissions of nitrogen oxides will be reduced by 80% from this tug fleet. Shore power will also become the norm for moored tugboats, so these can switch off their engines when inactive and during the rest-period of the crew.