President of Turkey and Turkish 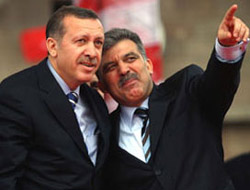 The highly popularized election of the 11th president of Turkey has increased the people's expectations of the presidential office, and this despite the ruling AK Party determination to curb some of the authority and duties of the president.

Gül boosts expectations from the presidency

The highly popularized election of the 11th president of Turkey has increased the people's expectations of the presidential office, and this despite the ruling Justice and Development Party's (AK Party) determination to curb some of the authority and duties of the president.

One particular columnist has already labelled Abdullah Gül's presidential term the "Gül Devri" (Rose Era), a term normally used as the Muslim equivalent to Greek mythology's Golden Age. Expectations from Gül include such a long list that it is almost impossible not to envision future clashes between the president and government. Civil society anticipates a president who will be active in promoting human rights, environmental issues and social coherence. Political parties expect President Gül to be a just mediator between the government and the opposition parties. Even the military establishment, which has hinted at its opposition to Gül's presidency, seems to be expecting its new commander-in-chief to be more active in the modernization and technical upgrading of the military.

Commenting on the heightened expectations of the general public for the presidential office, chairman of the Ankara-based Foundation for Political, Economic and Social Research (SETA) Dr. İbrahim Kalın said this is the first time in Turkey's history that the public has become a factor in the identity of the president. "Gül was already a public figure as deputy prime minister and foreign minister," Kalin said. He added, "Even if the election process was not well publicized, Gül would be a high-profile president." Kalın warned that nobody should expect Gül to become an alternative to the government or to marginalize his routine duties as president. "The president will work in coordination with the government, and this is actually Gül's advantage compared to the late President Turgut Özal, who had a similar vision for Turkey but who ascended to Çankaya Palace leaving behind a weak and unsupportive government. The party continuing to perform as usual will facilitate a much more active term for President Gül," said Kalın.

Kalın foresaw a vanguard role for Gül, not an executive one. He hopes that Gül is going to start discussions on certain issues including EU membership support, energy and the Turkic world as well as relieving the isolation of northern Cyprus and the improvement of civil society. According to Kalın: ?The president can coordinate government, business circles, media and the NGOs and direct their energies to certain issues. I think Gül will stress a civil and open society and transparency in his inauguration speech. Domestic issues that he will deal with may include improvement of the social structure through direct financial aid for education and health expenditures for the needy. In that sense I suppose that the new president will work with the newly flourishing aid organizations.?

Former Motherland Party (ANAVATAN) Central Decision and Administration Board (MKYK) member Hüseyin Kocabıyık spoke to Aksiyon newsweekly this week and expressed optimism that President Gül will complete what he calls the ?Özal Mission.? Kocabıyık said Gül is going to finish the ?people-state endorsement? that the late President Özal started. ?This will create a national synergy,? Kocabıyık said. He also added that Gül"s presidency will revolutionize government relations with the Turkish Armed Forces (TSK). Kocabıyık foresees a hierarchical list of priorities for Gül, starting with democratization that will also provide for security, continuing with economy and coordination between the organs of the state and ending with diplomacy. ?Çankaya Palace is going to turn into diplomatic headquarters,? Kocabıyık claimed. He added that the central role Gül is poised to assume is not going to clash with the government but will strengthen it. Regarding the expectations that President Gül is going to bring a new energy to EU reforms and negotiations, Kocabıyık warned that Gül may create his own alternatives to the EU. Recalling Özal"s late and unrealized project to bring the Turkic republics of Central Asia together under an EU-like economic umbrella, Kocabıyık said Gül may endorse this or a similar national project to accompany his efforts in pushing the EU reforms further.

Dr. İbrahim Özdemir of Ankara University"s Divinity School is a world-renowned ?Muslim environmentalist.? Speaking to Today"s Zaman, Özdemir expressed his expectation that President Gül will be active in human rights and environmental issues rather than political ones pertaining to the authorities and duties of the government. ?I hope Gül is going to establish an emergency team in Çankaya to deal with challenges like global warming, drought, environmental pollution and human aid programs. These are not political issues and solutions necessitate public awareness. With its symbolic value, the office of the president should be able to raise awareness on issues like these,? Özdemir said.

Opposition parties are also raising their expectations of the presidential office. Ironically the Republican People"s Party (CHP) has set a higher standard for President Gül and declared that they will have an eye on him on every law sent to Çankaya for approval. Deputy Chairman of Nationalist Movement Party (MHP) Cihan Paçacı praised Gül"s caliber and claimed that his performance in Çankaya will put the CHP to shame.

Former ANAVATAN deputy from Muş Alaattin Fırat works on the administrative board of the Turgut Özal Thought and Action Society, an NGO promoting late President Özal"s vision for Turkey. Speaking to Today"s Zaman, Fırat said expectations pertaining to Gül"s presidency are much higher in the eastern and southeastern provinces of Turkey. ?I have seen my fellow townsmen in Muş clapping for Gül. He received more applause than even Prime Minister Erdoğan. The expectations for the new president are not only about the presidential office but about the personality of Gül,? Fırat said.

Fırat emphasizes Gül"s previous declarations about Kurds living in northern Iraq, saying that those people are relatives and brothers of people of Turkey. ?This is an all-embracing style. He is promoting brotherhood within the unitary state structure. Our people in the eastern and southeastern provinces are observant Muslims, and they want to see their leaders mirroring themselves in terms of lifestyle and family life. People feel close to Gül, as if he were one of the family,? Fırat said. He also added that there is an expectation among the Kurdish population of a presidential visit to their cities and a series of meetings between the president and the leading intellectuals, elders and tribal leaders of the Kurds. ?The outgoing president did none of these things. Kurdish people want the new president to be the president of the whole nation, not only of the elite, white Turks. A visit by President Gül to cities like Diyarbakır, Hakkari or Urfa will bring much enthusiasm and hope to the region,? Fırat said.

President of Turkey and Turkish

This news is a total 790 time has been read