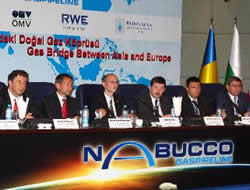 The prime ministers of Austria, Bulgaria, Hungary, Romania and Turkey ink the intergovernmental accord that marks a significant step forward in the Nabucco pipeline project.

The prime ministers of Austria, Bulgaria, Hungary, Romania and Turkey ink the intergovernmental accord that marks a significant step forward in the Nabucco pipeline project. The signing ceremony was long delayed due to lack of gas supplies. Turkmenistan, Iraq, Egypt and Syria all pledge gas in what Turkish PM Erdo?an welcomes as 'exciting news'

?Today"s signatures will make us even closer. Beyond a mere pipeline, we see Nabucco as a platform of friendship and cooperation, extending from Asia to Europe,? Prime Minister Recep Tayyip Erdo?an told a joint press conference attended by the president of the EU Commission, Jose Manuel Barroso, as well as the prime ministers of Austria, Bulgaria, Romania and Hungary.

?This project will make it possible to ship natural gas from Turkmenistan, Iraq, Syria, Egypt and Qatar,? said Erdo?an, insisting that Iran and even Russia might join the project in the long term, ?when conditions allow.?

Qatar could export liquefied natural gas, or LNG, to a projected facility in Turkey that could convert and pump the gas to Europe through the pipeline, he said, adding, ?Qatar could play a serious role in this project, which will allow the countries [in the region] to establish organic ties with Europe.?

Turkmenistan, Iraq, Egypt and Syria all said Monday they were ready to contribute gas to the yet-to-be-built 3,300-kilometer pipeline, which Erdo?an hailed as ?exciting news.? Azerbaijan, one of the other potential suppliers, said it is making the project a priority.

In Ankara, Iraqi Prime Minister Nouri al-Maliki expressed Baghdad"s willingness to raise daily oil production to 6 million barrels and to transfer natural gas to the West. He said Iraq could export natural gas to Europe via Turkey in an effort that shows the country seeks to become a part of the international system.

?We might be the source of supply six years later,? Iraqi government spokesman Ali Dabbagh told the Hürriyet Daily News & Economic Review on the sidelines of the ceremony. He said Iraq might contribute 15 billion cubic meters of gas starting in 2015, adding that the supplies could be shipped from the two major gas fields in Akkas and Mansuriyah, which the Iraqi government is planning to develop.

Open to Russia, closed to Iran

Although Erdo?an left the door open for Russian and Iranian participation in the project, the United States, which is backing Nabucco, said it does not object to Russian involvement, but argued Iranian gas is not needed.

?Who knows, maybe in the future, Russia will decide to participate like all the others, not to control the project, but to participate in a cooperative way, owning a minority share of the project and contributing to gas shipments like everybody else,? Matt Bryza, U.S. deputy assistant secretary of state for European and Eurasian affairs, told the Daily News.

?If it chooses to do that, it will be the first time Gazprom behaves that way and it would be a very positive development,? he said.

On the topic of Iran, the U.S. official said there were many important questions to be worked out with Tehran, which the Obama administration has expressed its desire to take a fresh approach toward.

?President Obama approached Iran with an open hand rather than a clenched fist. [But] I think the effort is complicated because of the recent events in Iran,? Bryza said. ?I am not responsible for the policy in Iran, but what I do know is that Iranian gas is absolutely not needed at all for the Nabucco pipeline.?

Bryza added that there was enough gas in Azerbaijan alone to fill the pipeline, noting that supplies from Turkmenistan and Iraq would also help the Nabucco project to function.

At the press conference, Erdo?an said the pipeline would ?elevate Turkey to a significant position? in providing European energy security and help boost the country"s EU membership bid, while Barroso welcomed the agreement as a very important development in relations between Turkey and the EU.

Despite the strategic bond it established with Brussels through the flagship project, Ankara, however, has not yet been able to open the energy chapter in its membership negotiations with the EU. As Bryza told the Daily News: ?What is happening with Nabucco? Yes, it does elevate Turkey"s strategic importance to Europe. It does do that. We hope that very soon the energy chapter will open.? 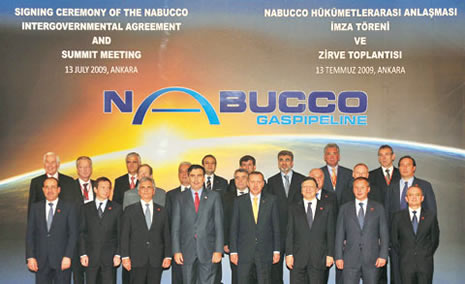 Leaders of participating countries pose for a group photo after the signing ceremony of the Nabucco intergovernmental agreement in Ankara.

This news is a total 2561 time has been read