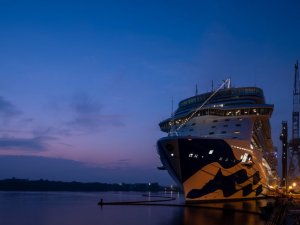 The delivery ceremony was held at the Monfalcone shipyard on October 15, 2019.

Following the recent completion of sea trials, the newbuild will embark on a maiden Mediterranean & Adriatic cruise from Athens to Barcelona later this month.

Sky Princess is the 17th ship that Fincantieri delivered to Princess Cruises. At 145,000 gross tons, the new unit has accommodation on board for 4,610 passengers and 1,411 crew members.

It is built on the basis of the sister ship project of Royal Princess, Regal Princess and Majestic Princess, all built at the same shipyard of Monfalcone starting from 2013.

The class will continue with the upcoming Enchanted Princess and Discovery Princess, which will be delivered in 2020 and 2021, respectively.

What is more, Fincantieri will build for Princess Cruises another two next-generation cruise ships. These will be the largest built in Italy with a gross tonnage of 175,000 tons. Slated for delivery at the end of 2023 and in spring 2025, they will accommodate approximately 4,300 passengers and will be the first in the shipowner’s fleet to be dual-fuel powered primarily by LNG.

Princess Cruises currently has a fleet of eighteen ships that carry over 1.8 million passengers annually.