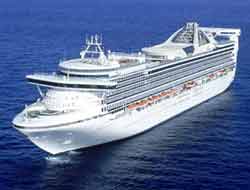 Re-scheduled out of respect for SEA DIAMOND sinking. The christening ceremony for the newest addition to Princess' fleet, Royal Princess, has been re-scheduled for June 14 in the picturesque port of Portofino, Italy.

ROYAL PRINCESS to be christened at Portofino

Re-scheduled out of respect for SEA DIAMOND sinking.

The christening ceremony for the newest addition to Princess' fleet, Royal Princess, has been re-scheduled for June 14 in the picturesque port of Portofino, Italy. Originally to have been held in Santorini in a double naming ceremony with Emerald Princess on May 12, the event was changed out of respect for the tragic sinking of a the Greek cruise ship SEA DIAMOND in that location.

Royal Princess' relocated christening celebration will take place during the ship's first port of call on a voyage that begins in Rome the previous day. Further details, including the announcement of the godmother, will be released shortly.

"Although we're saddened by the tragedy that prompted this change, we are pleased to name Royal Princess in a beautiful Mediterranean port that signifies the ship's visits to some of the most scenic ports in Europe," said Alan Buckelew, president of Princess Cruises. "Portofino is a charming example of the type of the 'explorer' destinations we're able to highlight with this smaller vessel, and we're delighted to be able to christen our new ship in such a beautiful location."

A sister ship to the line's popular Tahitian Princess and Pacific Princess, the 30,200-ton Royal Princess offers passengers a boutique version of Princess' acclaimed onboard options -- including a variety of dining and entertainment choices and a large number of cabins with private balconies - all offered in intimate surroundings. The 710-passenger vessel and her sisters have become popular choices for vacationers looking for a "off the beaten path" itineraries and a small-ship experience.

One of the Mediterranean's most picturesque towns, Portofino is known for its enchanting views and a lovely waterfront. The quaint fishing village sports a dramatic natural harbor that has attracted sailing vessels for centuries. Made famous by visits from royalty and Hollywood stars, the resort town became a favorite European travel destination in the 1950s, and today offers a secluded atmosphere, natural beauty and charming waterfront houses and cafes.

Portofino represents the many unique ports of call available on Royal Princess itineraries. The christening voyage - a new "Mediterranean Collection" itinerary - features three of the four new ports debuting for Princess this season: Ravenna, Italy; Split Croatia; and Kotor, Montenegro. Royal Princess also offers sailings that visit the ruins of Troy with a call at the new port of Canakkale, Turkey, as well destinations such as the Crimean coast, Egypt and the Holy Land.

This news is a total 530 time has been read