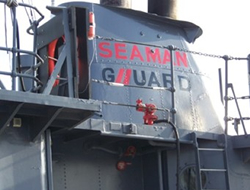 The Madurai bench of Madras high court has dismissed the bail plea of the 35-member crew of the US-based anti-piracy ship 'M V Seaman Guard Ohio.
Tamu Nadu police since the vessel was arrested in October 2013, reports 'The Times of India'.
Captain Dudinik Valentyn and 34 others were booked under the 'Arms Act' and the 'Essential Commodities Act' and were also accused of illegal purchase of diesel from local agents.
At the [High Court] hearing the bench passed orders dismissing the bail application after accepting the contentions of the government side. The prosecution told the court that three people were yet to be arrested in the case and the investigation was at a crucial stage. Also that the documents relating to keeping arms in the vessel were yet to be submitted to the police. The crew members have been kept in judicial custody for 50 days.
The crew members had alleged in their petition that the anti-piracy vessel was lured into the port  on October 12 and the claim of the authorities that the ship was intercepted [at sea] was false. The ship was 19 nautical miles away from the Indian coast, beyond the territorial jurisdiction of India, the petitioners  claimed.
www.turkishmaritime.com.tr
This news is a total 1356 time has been read