Problems stack up at US Pacific ports 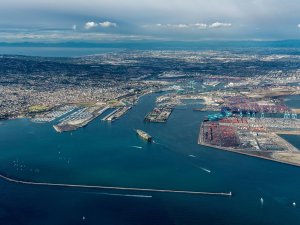 A labour dispute and problems handling vast new container ships have led to the worst delays in 10 years at US west coast container ports, with shipping lines being forced to divert vessels or cancel services.

Retailers have called on President Barack Obama to intervene after they were left struggling to get hold of stranded goods. Other sectors of the US economy including manufacturing and agriculture have also been hit.

The situation has been most acute at the neighbouring ports of Los Angeles and Long Beach, which together handled 41 per cent of US container traffic in 2013. However, high cargo volumes and a simmering labour row over pay and conditions have caused disruption all along the US Pacific coast.

The hold-ups have left queues on some days of up to 18 ships waiting in San Pedro Bay off Los Angeles to dock. According to the US’s National Retail Federation, congestion has pushed up the waiting time to retrieve containers from the ports after unloading from two to three days to seven to 10 days.

Los Angeles and Long Beach, like other west coast ports, have many small container terminals that have been easily overwhelmed by the larger cargo volumes that bigger ships produce. The terminals also lack the latest, most efficient equipment, while a shortage of truck chassis to haul containers has further exacerbated the problems.

The Pacific Maritime Association, which represents employers, in December asked for help from federal government mediators to resolve the problems. The International Longshore and Warehouse Union, which represents workers, has not yet said whether it will agree to mediation.

“For the last few months we’ve seen significant impacts of the congestion and the slowdowns, not just in retail but in other sectors of the economy which rely on the west coast ports,” said Jonathan Gold, head of supply chain for the NRF.

The White House has made no response following the plea by the NRF and other business groups for the president to intervene. The Federal Mediation and Conciliation Service, which would handle any negotiations, has acknowledged the request but declined to say what its involvement might be.

Although many sectors have been hit by the congestion, among the best-publicised effects has been a shortage in Japan of prepared French fries for McDonald’s restaurants that are exported from the US.

We hear a lot from manufacturers who are waiting for inputs to production. Farms and agriculture companies are having a lot of problems

Neil Davidson, ports analyst for London-based Drewry Shipping Consultants, acknowledged that labour problems had contributed to the slowdown, though it was unclear how much.
The G6 container shipping alliance has said it will cut a weekly service into Los Angeles for four weeks in January and switch another call from congested Tacoma to Seattle. Other lines are expected to take similar measures.

“It’s not just a single reason or two reasons,” Mr Davidson said. “It’s six or seven entirely unrelated reasons causing this that makes it so much more difficult to rectify.”

The PMA, whose contract with the ILWU expired in July, blamed all the problems outside LA-Long Beach on slowdowns and other disruptive tactics by ILWU members angry at prolonged negotiations.

The ILWU, meanwhile, has insisted the problems reflect failures by management. “The port congestion crisis was caused by bad industry decisions that predate the slowdown allegations,” it said.

This news is a total 1581 time has been read
Tags: Barack Obama, economy, Los Angeles, US, President, Pasific