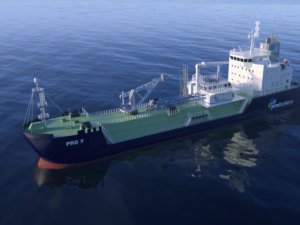 As informed, the signing of this LOI follows a long optimization process during which probunkers’ technical team reviewed more than thirty ship design proposals.

The process involved organizations such as the American Bureau of Shipping (ABS), design, engineering and manufacturing companies, as well as experienced seafarers who have all followed the developments in the world of LNG as fuel, according to probunkers.

“Having reached an initial agreement with HMD is a major milestone in our project that underlines our aim towards quality and reliability, cornerstones in probunkers’ philosophy, while at the same time demonstrates the confidence of all stakeholders in the success of our plan and the importance of it,” Alexander Prokopakis, probunkers’ CEO, commented.

Back in 2018, probunkers unveiled plans to design, build and operate a fleet of eco-friendly LNG bunker vessels in order to respond to the ever-changing needs of global shipping. The project, which involves a total investment of USD 343 million based on a ten-year plan, encompasses planning, financing, implementation, operations and sales.

probunkers will have a three-tier role —  as physical supplier, LNG trader/seller and barge owner and operator.