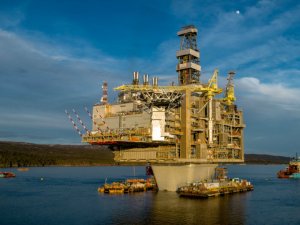 ExxonMobil has announced that the Hebron offshore project in Canada has started production ahead of schedule. At its peak, the project will produce up to 150,000 barrels of oil per day.

Discovered in 1980, the Hebron field is estimated to contain more than 700 million barrels of recoverable resources. The Hebron platform measures about 220 meters in height and weighs about 750,000 tons. It consists of a stand-alone gravity-based structure, which supports an integrated topsides deck that includes living quarters and drilling and production facilities. The platform has storage capacity of 1.2 million barrels of oil.

The platform is located about 200 miles (350 kilometers) offshore Newfoundland and Labrador in water depths of about 300 feet (92 meters).

During Hebron’s eight-year construction process U.S. oil prices collapsed from over $100 a barrel to as low as $26, reports news agency Reuters. Foreign oil majors sold off around $23 billion in Canadian assets this year as a result of depressed prices.

This news is a total 967 time has been read
Tags: Production Starts at Canada's Hebron Oil Field