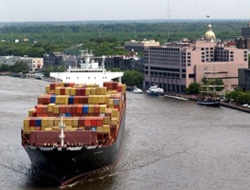 The U.S. Senates passage of the federal Water Resources Reform and Development Act of 2014 (WRRDA) has cleared the way for construction to begin on the Savannah Harbor Expansion Project. The House passed identical legislation on Tuesday.

“Today’s action is an important step toward better accommodating the larger vessels that are the new standard in global shipping,” said Foltz. “Georgians owe a debt of gratitude to the members of our congressional delegation, who worked tirelessly for more than a decade to bring this day about.”

The bill officially lifts the spending limit set when lawmakers first authorized the project in 1999, which will allow both state and federal dollars to flow to the port deepening.

“This landmark legislation will update an outdated spending cap that was put on the Savannah Harbor deepening project more than a decade ago, eliminating the last legislative hurdle and allowing us to use the money we have set aside to begin construction,” said Georgia Gov. Nathan Deal.

“With the understanding that we’ll have a federal-state split on funding, Georgia has lived up to its promises. We’ve now put aside $266 million — the total state share. This project is vitally important for economic development and job creation not only in the Southeast, but nationally as well.”

“After 16 years of study, we are now on the eve of construction,” said GPA Board Chairman Robert Jepson. “This project will provide significant annual benefits to American businesses, reducing shipping costs by $213 million a year — for a return on investment of $5.50 for every dollar spent to construct and maintain this project.”

Once the US president signs WRRDA into law, Georgia will enter a Project Partnership Agreement (PPA) with the U.S. Army Corps of Engineers. The PPA defines how the costs of the project will be shared between the state and federal government.

Foltz said he expects to have a binding PPA within 90 days, allowing accelerated use of Georgia’s portion of the funding. These funds will be credited against the state’s ultimate cost share at the end of construction.

Initial contracts will include dredging to extend the entrance channel from the mouth of the Savannah River by seven miles farther into the Atlantic Ocean.

Other early project elements include mitigation features such as an oxygen injection system, a freshwater storage alternative for the city of Savannah and recovering the CSS Georgia.

The project is necessary because the world fleet is moving to larger ships. The average vessel calling on the U.S. East Coast is shifting from a capacity of 4,500 twenty-foot equivalent container units (TEUs) to approximately 9,000 TEUs.

“The deepening will cut transportation costs by reducing transit delays for larger, more efficient Post-Panamax vessels,” Foltz said. “Cost reductions of about 30 percent are expected, saving billions over the 50-year life of the project.”

This news is a total 1394 time has been read