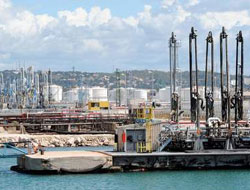 The port of Marseilles" Fos and Lavera oil terminals were out of action for a second day running on Friday as port authority workers protested over the port"s plans to transfer them to private sector control.

No vessels were caught in the terminals by the strike but 35 vessels were reported to be waiting outside the port. Other cargo terminals at the port were operating normally.

A port spokeswoman said that the strike was linked to negotiations over the strategic plan that the port has to draw up under the terms of recently passed French port reform legislation.

Negotiations over the plan, which will detail, notably, how port authority cargo-handling activities will be transferred to the private sector, began two weeks ago and there had already been a series of protest actions prior to the 24-hour strikes which took place on Thursday and Friday.

The port spokeswoman said that the port authority had proposed creating a new company to run the port"s oil terminals in which it would have a ?significant shareholding? alongside private sector operators.

The port reform legislation provides for the transfer of port terminal activities to the private sector wherever possible, although port authorities can set up stand-alone subsidiaries if no suitable private sector takeover candidates come forward.

The port of Marseilles" oil terminals are considered to be a special case, however, in that they are operated entirely by port authority personnel.

Strike action by port authority oil terminal personnel at Marseilles in 2007 led to the campaign by French port employers which resulted in the port reform legislation passed by the French parliament in July.