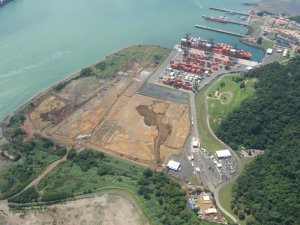 PSA Panama International Terminal has started works for the future 2 million-TEU (20-foot equivalent units) facility with the launching of the quay and dredging works.

The works, approved by Panama’s National Assembly earlier this year, include the dredging and excavation of approximately 4 million cubic meters of material, as well as the construction of an 800-meter quay wall. When fully operational, PSA Panama will be able to handle two mega ships simultaneously.

“PPIT’s expansion gives shipping lines the peace of mind that there is enough capacity on the Pacific side of Panama for the foreseeable future and enables us to capitalize on the opportunities that the expanded Panama Canal brings,” Enno Koll, Head of Latin America for PSA, said.

New container handling equipment to be added includes eight new super-post-Panamax quay cranes as well as 12 rail-mounted gantry yard cranes. PSA said that around USD 450 million will be invested in the expansion.

After six months of design and tendering process, the first contracts have been awarded to Jan De Nul and Saipem – construction contractors headquartered in Belgium and Italy respectively.

The terminal is scheduled to be made operational in the first half of 2017.

This news is a total 2891 time has been read
Tags: Dredging, expansion, PSA Panama, Quay