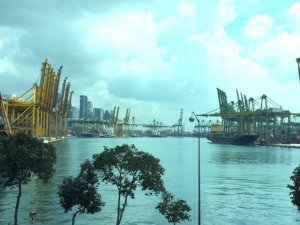 In what will not go down as a banner year for any container port around the world, Singapore port moved a total throughput of 25.57m teu in the first ten months, down 1.7% from 26.01m teu in the previous corresponding period.

Nevertheless, PSA has moved to cement more business throughout the year.

In March PSA announced that joint venture Cosco-PSA Terminal will invest in new container berths in Singapore in order to serve the next generation of mega container vessels.

Cosco-PSA Terminal will move from it current two-berth terminal at PSA’s Pasir Panjang Terminal Phase 1 to three new mega berths at the terminal’s Phase 3 and Phase 4. The new berths are expected to start operations from next year.

In June CMA CGM and PSA formed a joint venture company CMA CGM-PSA Lion Terminal to operate and use four mega container berths at Pasir Panjang Terminal Phases 3 and 4 in Singapore. Rodolphe Saadé, vice chairman of CMA CGM, described the venture as “a significant step, demonstrating the ongoing importance of Singapore to our strategy, and delivering on our commitment to making Singapore the Asian hub for the group.” CMA CGM also took over Neptune Orient Lines, Singapore’s flagship line, during 2016.

PSA is also determined to be at the forefront of tech developments linked to the ports and transportation industries. In May, for instance, it launched PSA unboXed, a corporate venture capital arm that invests in start-up businesses involved in IT and data analytics and automation for handling containers and other cargo.

PSA unboXed will initially have a fund of S$20m ($14.6m) for its incubator programme, which will invest in technology such as IoT (Internet of Things), cloud storage, data analytics, AI (artificial intelligence) and optimisation, plus engineering solutions that utilise robotics and automation.

Selected start-ups will receive up to S$50,000 in seed funding initially, and will be provided with facilities at PSA’s Pasir Panjang Terminal Building 3 in Singapore. Professionals at the PSA’s Singapore container terminal and other business leaders will act as mentors.

“Through PSA unboXed, we want to encourage creative ideas that can improve and revamp LogTech (Logistics Technology), increase port productivity and enhance the integration, security and performance across the constituents of global supply chain logistics,” Tan Chong Meng, group CEO of PSA International, said in a release.

Operating 24/7, the AGVs will be used to transport containers between the quayside and the container yard completely without human drivers. Delivery is expected in the second quarter of 2017, and the new units will join the existing eight hybrid-powered AGVs operating at Pasir Panjang Terminal.

PSA is in the midst of building an automated port in Tuas to the west of the republic.

Ong Kim Pong, regional CEO Southeast Asia at PSA International, said, “Investing in advanced port technologies remains a key element in PSA’s development of our terminals in Singapore to meet the challenges of growing consolidation and mega-alliances calling at our port.”

In Tuas dredging is already underway for the new 65m teu port that could look like a futuristic multi-storey carpark when completed in 2030.

This news is a total 1201 time has been read
Tags: PSA plans ahead