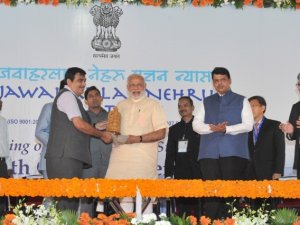 Singaporean port operator PSA International and its India-based subsidiaries laid the foundation stone for the fourth container terminal at Jawaharlal Nehru Port in Mumbai on October 11.

The ceremony was attended by India’s Prime Minister Shri Narendra Modi who laid the foundation stone.

The terminal will be completed in two phases, with each phase of the terminal adding an annual capacity of 2.4 million TEUs. The project is valued at around INR 7,915 Crores (USD 1.22 billion).

The development of Phase 1 is expected to be completed in three years. Upon full completion of both phases, BMCT will have a quay length of 2,000 metres, 24 quay cranes and a designed capacity of 4.8 million TEUs per annum.

“Today’s ceremony marks a key milestone in the joint efforts between PSA and JNPT to develop this new container terminal called Bharat Mumbai Container Terminal in Jawaharlal Nehru Port, India’s largest and premier container gateway. The Indian government has identified sustainable economic growth as a key pillar in the country’s ‘Vision 2022’ and the development of BMCT, PSA’s latest port project in India, will help facilitate that. I wish to thank JNPT and other stakeholders in India for the opportunity to work alongside them to develop this monumental project in India,” said Tan Chong Meng, Group CEO, PSA International.