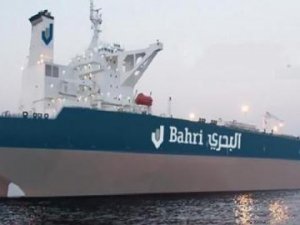 The Public Transport Authority (PTA) has raised the Saudi flag on Rimthan, one of the latest VLCCs (Very Large Crude Carrier) received and owned by Bahri, a global leader in transportation and logistics.

Under the supervision of PTA, the ceremony of Rimthan’s registration under the Saudi flag took place on Sunday, October 8, 2017, at Port of Ras Tanura in the Eastern Province of Saudi Arabia, and was attended by senior officials of both PTA and Bahri. Thus, Rimthan became the 40th Saudi VLCC, owned and operated by Bahri.

H.E. Dr. Rumaih Mohammed Al-Rumaih, President of the Public Transport Authority, said: “The Kingdom’s strong regional and international position in the maritime transport sector owes to the great interest and support of the Kingdom’s government. Through its supervisory and regulatory role and the efforts of its partners in the private sector, the Authority aims to strengthen the Kingdom’s maritime fleet in keeping with its status.”

“We want to ensure and increase our supply of energy resources to the world market, especially in the oil sector. The Kingdom is globally recognized for its commitment to all international conventions and protocols relating to the enhancement and preservation of the marine environment, as well as its full commitment to all treaties and agreements relating to maritime safety and security, and piracy combating, in line with the Kingdom’s close cooperation with the International Maritime Organization (IMO),” added Al-Rumaih.

He also praised the earnest efforts exerted by the General Directorate of Border Guards and the Saudi Ports Authority to ensure a maritime transport that meets the highest international standards, promises the Kingdom an advanced position in this vital industry, and contributes towards achieving the Saudi Vision 2030.

Ali Al-Harbi, Acting CEO, Bahri, said, “We are proud to add a new VLCC to Saudi Arabia’s maritime fleet. The registration of Rimthan under the Saudi flag is an important national achievement that will strengthen the Kingdom’s reputation and standing in the transportation sector worldwide. This also supports our efforts to register all our large and mid-sized carriers under the national flag through the Public Transport Authority by the end of 2017, which will help enhance Bahri’s competitive edge in the market while contributing to an increase in bilateral maritime trade volume between Saudi Arabia and other global economies.”

Al-Harbi concluded by thanking the PTA President and the Authority personnel in the East Coast for their fruitful cooperation in facilitating the raising of the Saudi flag on Rimthan and registering her as a Saudi oil tanker.

Rimthan arrived in the Kingdom from her maiden voyage in early October, docking at Port of Ras Tanura, from South Korea, where she was delivered to Bahri in September by Hyundai Heavy Industries, the company that built her. Bahri plans to expand its aggressive Saudi fleet and is set to add one more VLCC to it before the end of the year to reinforce its position as the world’s largest owner and operator of VLCCs.

The Saudi Arabian flag is raised on cargo and passenger vessels after they are successfully registered by the Public Transport Authority. They are then inspected and checked regularly in accordance with the standards laid down by international classification authorities accredited by the Kingdom.

This news is a total 1761 time has been read
Tags: Public Transport Authority raises the Saudi flag on Bahri’s VLCC Rimthan