Put pressure on the countries 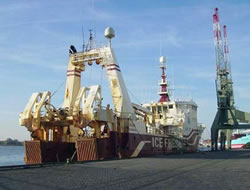 The European Commission has recently handed out formal warnings to Korea, Ghana and Curaçao as they fail to keep up with international obligations to fight illegal fishing.

Known as “yellow cards”, the commission presented the nations with these warnings after identifying “concrete shortcomings such as a lack of actions to address deficiencies in monitoring, controlling and surveillance of fisheries.”

According to a media statement by the EC, the commission will work closely with the nations to suggest corrective actions to resolve these issues and the yellow cards “will not, at this stage, entail any measures affecting trade”.

"We continue to put pressure on the countries that are fuelling the supply chain of illegal fishing be it as a coastal state, flag state, or flag of convenience,” said European commissioner for maritime affairs and fisheries Maria Damanaki.

“West Africa was identified as a major source of illegal fishing and my intention is now take the same thorough approach in the Pacific."

However these warnings have not been received warmly. The Korean Herald reported that South Korea “expressed its displeasure” with the EC’s action, citing steps the country had taken to bolster fishing regulation.

This news is a total 1163 time has been read