Putin holds out the olive branch 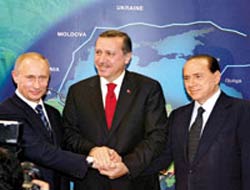 Russian Prime Minister Vladimir Putin expressed on Saturday the possibility of working toward expanding the Blue Stream gas pipeline, which currently travels under the Black Sea to Turkey.Putin made these comments at a news conference Saturday after talks with Mirek Topolanek, the prime minister of the Czech Republic, which is presently occupying the EU's rotating presidency. The talks were aimed at ending the stand-off between Russia and Ukraine over gas transit through Ukraine that has left a number of Eastern and Central European countries with acute gas shortages.

The proposed expansion of Blue Stream would link to a Samsun-Ceyhan pipeline currently under consideration and would also involve a branch to Southeastern Europe.

The ongoing crisis has highlighted the pressing need to diversify energy routes for natural gas. Russia supplies Europe with about 25 percent of the continent's natural gas, most of which passes through Ukraine. A significant amount of Russian gas destined for Turkey travels through Ukraine as well. Another pipeline from Russia to Turkey travels under the Black Sea and is called Blue Stream, delivering 35 million cubic meters of gas daily. The pipeline is said to be operating well under capacity.

Russia's expression to extend the pipeline has significant implications for Turkey, with many analysts noting that the present crisis underlines the need to diversify pipeline routes. Dr. Sohbet Karbuz, head of the oil and natural gas department at the Observatoire Mediterraneen de L'Energie (OME), said that the interesting thing is that "politics comes before business in the pipeline business."

If the pipeline is expanded, it would be significantly to Turkey's benefit, Karbuz noted. Turkey could then extract transit fees for gas supplies traversing Turkey en route to European markets as well as "increase Turkey's leverage vis-à-vis the EU."

Another expert on energy politics who spoke to Today's Zaman on condition of anonymity expressed the view that Putin's proposal to extend the Blue Stream was intended to send the message to Turkey that "Russia is ready to cooperate with Turkey."

The message had subtle implications for broader security issues, the expert noted. "This is not the first time that Russia has conveyed such a position. Russia has long been interested in getting involved in the Nabucco project; however, it has been unable as a result of reservations of the EU and the US." The key message, according to the official: "Turkey needs to take a side."

Karbuz notes that if the South Stream project is developed first, the urgency to complete the Nabucco project would be reduced.

"We will see what happens in the coming months," said Karbuz, in response to Putin's recent statements concerning discussions with South Stream partner countries. "At present the Memorandum of Understanding [to build the South Stream pipeline] between partner states is not important. Contracts are key. If the contracts come up before Nabucco's completion, Turkey would be affected."

In related developments, Ukraine reportedly signed a deal Sunday that provides for EU, Ukrainian and Russian observers to monitor gas flows through Ukraine. Russia and Ukraine have not come to an agreement on supplies to Ukraine, and they remain cut off. Experts have said it may take 36 hours from the time gas starts flowing for capacity to build up in pipelines and reach consumers in Europe.

This news is a total 596 time has been read