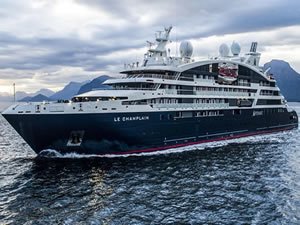 The next country set to resume cruise services on a limited basis is none other than Qatar. The model is closely based on the one being followed by many other countries of the world, one involving short cruise programs for citizens and residents. It is slated to begin in March 2021.

LE CHAMPLAIN is part of the company's 10,000 GT fleet, notably the Explorer class of cruises. It can accommodate up to 184 passengers, a perfect ship for starter operations.

The Port of Doha will facilitate cruise operations, hosting six sailings of four-days and three nights each. There would be opportunities for snorkeling, water sports, sightseeing, and observing local marine and wildlife at close quarters. Marine life includes dolphins, hammerhead sharks, dugongs, flamingos, and whale sharks from North-eastern Qatar.

The excursion will be led by a host of marine naturalists, ornithologists, and biologists.

The above model has been successfully implemented by a host of other countries including Norway and Germany. Asian powerhouses like Singapore and Japan have laid out strict health protocols for cruise resumption.

Qatar Airways Group Chief Executive Akbar lawmaker said, “I am hugely excited to launch our first luxury cruise for people in Qatar. With the ongoing coronavirus pandemic limiting international travel our Three Night Luxury Coastal Cruise will provide our local customers with a much-needed change of scenery and a memorable travel experience.”

This news is a total 3664 time has been read
Tags: Qatar , LE CHAMPLAIN cruise ship