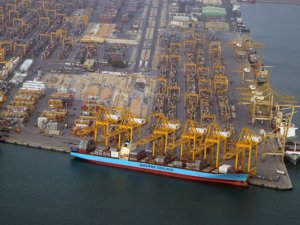 Dubai’s status as a financial hub for the region is increasingly coming under threat as one of Qatar’s major shipping and logistics firm relocates its regional trans-shipment hub from Dubai to Oman’s Sohar port.

With the Saudi led blockade of Qatar now entering its third month, Milaha Maritime and Logistics, which “delivers a comprehensive range of services to some of the region’s biggest players in the oil, gas and petrochemical sectors”, announced the move that may raise concerns in Dubai over its potential to remain the unrivalled economic hub of the region.

One of the measures taken by the blockading countries was to deny Qatar access to their ports. Typically, cargo for Qatar stopped at the UAE’s massive port in Jebel Ali, Dubai, or in Abu Dhabi, then got put on smaller boats heading to Doha. Following the blockade, international free trade zones like Jebel Ali were off-limits to Qatari companies. Hundreds of containers destined for Qatar were seized by the authorities in clear breach of the provisions and laws of the International Trade Organisation that safeguard the free flow of goods.

Oman was quick to announce its readiness to become the import/export hub of the region. The Gulf Cooperation Council (GCC) member was one of the countries that stood to benefit from the Saudi-led blockade after deciding to remain neutral and allowing Qatar-bound ships to use its ports. The country also launched one of its boldest projects; Bayan is the largest electronic system in the Sultanate that allows international traders to obtain government permits and licences quickly and efficiently.

An increasing number of companies have now turned to Oman, and that is likely to have a severe knock-on effect on Dubai. Analysts have warned that the economic embargo on Qatar could hurt Dubai’s status as a financial hub.

Industry analysts believe that both Kuwait and Oman will reap the benefit of trade transactions that used to take place in countries like the UAE. Qatar Petroleum chief Saad Al-Kaabi told Al Jazeera that, as the world’s largest exporter of liquefied natural gas (LNG) producing up to 77 million tonnes each year, it had to move quickly to mitigate the impact of the blockade and secure alternative routes. While stressing that the blockade has made Qatar much stronger, Doha was in any case unlikely to return to using ports within the blockading countries that previously serviced its global exports.

On Monday, Qatar’s transport ministry said three new direct shipping lines are being opened with Malaysia, Pakistan and Taiwan. These countries, along with Oman and Kuwait, are expected to benefit financially from doing trade with the countries affected by the boycott.

This news is a total 1001 time has been read
Tags: Qatar shipping company moves hub from UAE to Oman