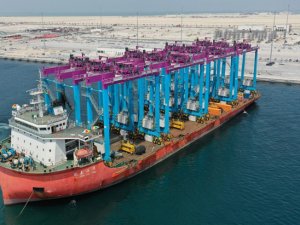 The terminal is being developed in four phases and the first two phases are expected to be fully operational before the end of 2022 adding 3m teu of capacity.

HE Qatar Minister of Transport and Communications (MOTC) Jassim Saif Ahmed Al-Sulaiti said: “Announcing the initial operation of CT2 is a new achievement to be added to Hamad Port’s series of previous achievements, thus boosting its huge potential, advanced utilities and modern systems for increasing Qatar’s trade with the world, in addition to improving the country’s competitiveness by transforming it into a regional business hub with sustainable development for the coming generations.”

Phases 1 and 2 of CT2 cover 380,000 sq m at Hamad Port and it has a 624 m length quay. Phase has been equipped with three semi-automated, remote controlled quay cranes, with four more cranes to be added in 2021.

The new terminal has also been equipped with 12 RTGs with 14 more to be added in 2021. In addition CT2 will use 22 APM 75T HE terminal tractors which are battery-powered producing zero emissions.

“During developing CT2 and its associated building and construction works, MOTC’s vision has been implemented, which aims at supporting the local manufacturing and deploying latest technologies that are based on environmental sustainability and clean energy,” the Minister said.

This news is a total 2507 time has been read
Tags: Qatar’s Hamad Port Container Terminal 2 to start operations in December