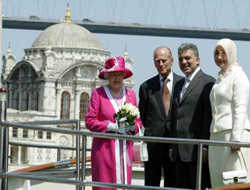 The queen of England, currently on a four-day trip to Turkey with her husband, Prince Philip, yesterday toured the city of ?stanbul, where she took in exhibitions and enjoyed a boat tour of the Bosporus Strait.

The queen of England, currently on a four-day trip to Turkey with her husband, Prince Philip, yesterday toured the city of ?stanbul, where she took in exhibitions and enjoyed a boat tour of the Turkish Strait.

Queen Elizabeth and Prince Philip made a stop at the historical Kabata? High School for Boys in the afternoon shortly after the couple's arrival, where they met with Turkish and British students in the schoolyard. The queen later enjoyed a view of the Bosporus from the terrace of the high school, a late 19th century building located on the European banks of the strait.

Here, the queen and her retinue viewed exhibits in the complex, where carpets and some of Turkey's culinary delicacies, such as Turkish delight, nuts and ice-cream from Kahramanmara?, as well as various souvenirs, were on display.

The queen and her retinue, who met with President Abdullah Gül and first lady Hayrünnisa Gül at the dock of the Kabata? High School, took a cruise on the Bosporus on the Keyif Style. Foreign Minister Ali Babacan, his spouse, Zeynep Babacan, and British Foreign Secretary David Miliband also joined them on the yacht.

Security was tight at the museum during the queen's visit, with sharpshooters situated on rooftops near the building. Some journalists whose names were not on the approved list of journalists sent to museum security by the national police department were not allowed into the building.

Turkey a bridge between East and West

Queen Elizabeth on Tuesday praised Turkey at a state banquet held in honor of her visit, her second in 37 years. "Turkey is uniquely positioned as a bridge between East and West at a crucial time for the European Union and the world in general," stated the queen.

In a gesture of respect, President Abdullah Gül wore a tuxedo and a silver-colored bow tie to the 300-guest banquet Tuesday evening.

Also on Tuesday, the queen visited the mausoleum of the founder of modern Turkey, Mustafa Kemal Atatürk, and laid a wreath at the tomb, a tradition expected of all visiting dignitaries.

On the second day of her trip, Queen Elizabeth visited the northwestern city of Bursa and toured the "silk cocoon market," a caravanserai built in 1491 at the 15th century Green Mosque, where she listened to a recitation of the Quran.

This news is a total 1578 time has been read