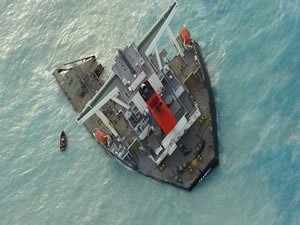 Some of its assumptions and interpretations are worth further examination, and in the interest of objectivity, a detailed analysis with supporting data follows below.

A recent series in Forbes on the Wakashio grounding and the state of the shipping industry has attracted considerable attention.

Some of its assumptions and interpretations are worth further examination, and in the interest of objectivity, a detailed analysis with supporting data follows below.

Assumption 1: Shipping is a boom industry The cyclical nature of shipping is the stuff of Economics 101.

Demand for shipping service is derived from commodity trade, geographic separation and dynamic patterns of global production and consumption.

Viable investment in this sector is, to quote Warren Buffett, all about time in market rather than timing the market.

A quick look at the Baltic Dry Index will show us that there was more volatility in the period after the 2009 financial market meltdown than between 1985 to 2000.

ASSUMPTION 2: GROWTH IN DEADWEIGHT TONNAGE AND SHIP SIZE HAS LED TO MORE PROFITS FOR SHIPOWNERS.

If size were determined by profit motive, the world would only have large ships. Size is driven by demand forecast for large inventories of low-cost commodities.

A larger ship costs more to finance and operate, but it is cheaper for the trader to move his goods, thanks to economies of scale.

Even better, larger ships emit less CO2 per ton-mile hauled. Profitability is a function of income, cost of investment and operations.

It is also a function of appetite for physical and financial risk. Critically, profitability is an inverse function of competition.

The 2019 consolidated profit of Maersk Group was just $44 million against a revenue of $9.6 billion.

Their average annual profit stands at just $676 million over the past six years.

This is what competition can do even to market leaders, let alone the stragglers. I cannot recall when a shipping group figured in the top 10 of the Fortune 500. By contrast, in 2019 Apple led the smartphone global market with an 18 percent share by value.

Its 2019 revenue was $260 billion and its profits were $38 billion. Toyota led the automobile segment with a 10 percent market share, revenues of $20.3 billon and profits of about $1.5 billion.

Like shipowners, these multinational corporations ‘flag’ their manufacturing and marketing centers all over the world where they find business efficient and convenient.

ASSUMPTION 3: “FLAG OF CONVENIENCE” SHIP REGISTRATION IS INIMICAL TO THE PARIS AGREEMENT, AND THESE FLAGS WIELD DISPROPORTIONATE INFLUENCE AT IMO

The biggest blow to the Paris Climate Accord came from the second-largest emitter of greenhouse gases, the United States - not from Panama, the Marshall Islands or Liberia.

Like the United Nations, IMO is a democratic meeting ground of maritime nations. IMO encourages its 174 member states to debate on technical issues concerning shipping, share and understand national priorities and finally vote on adoption of Codes, Standards and Conventions into national legislation.

Each member state has a vote, and Panama, Liberia and Marshal Islands represent only three votes.

Their tonnage is owned by three leading ship-owning nations - Greece, China and Japan.

The EU block represents 20-odd votes. It is a delicate balance, and it is not dominated by any particular group of states (for example, the OECD).

All flag administrations, including Panama, are signatories to IMO conventions and committed to their adoption.

The biggest cost to a ship is fuel, followed by port and canal dues, operating costs and finance costs.

Cost of registration is not even a consideration.

These three incidents bear an uncanny resemblance to the Wakashio, the Norman Atlantic and the Gulf Livestock 1 casualties, but these ships were not flying “flags of convenience.”

Two of the 2020 incidents are a direct result of poor professional judgement. What goes underreported in the mainstream media is that the seafaring community is facing a dangerous humanitarian crisis, with hundreds of thousands of seafarers overdue for relief but unable to go home due to COVID travel restrictions.

It does not take much expertise to figure out the impact of mental stress on safe ship operations.

ASSUMPTION 5: PANAMA IS UNFIT TO REGISTER SHIPS AS THEY DO NOT HAVE THE ABILITY TO INSPECT SHIPS AND DELEGATE THIS FUNCTION TO CLASS SOCIETIES, WHOSE CONSULTANCY ARMS INTERFERE WITH DUE DILIGENCE

Nearly every flag state in the world - including France, Australia, Japan, the United States, UK and Cyprus - delegates this specialized inspection function to class societies.

Class inspections are an efficient and indispensable regulatory vehicle from building a ship to the end of its life. Conflict of interest is a valid concern, though minor at this point.

The larger problem, as with large audit firms, is that class can only help the responsible owner to sustainably manage risk.

Class is limited in its ability to reprimand the shipowner who tries to cut corners.

Port state control regimes across the world, Rightship and oil major SIRE inspection system have plugged this gap well. It is worth noting that the flags of the Republic of the Marshall Islands, Liberia and Panama are all featured in Paris MoU Port State Inspection White List, alongside Australia, the UK, Germany, USA and Japan.

Within the ‘White List’ (an unfortunate turn of phrase in these sensitive times), Liberia and Marshall Islands return an outstanding safety record despite a large fleet in their “flag of convenience” registry.

ASSUMPTION 6: SHIPS ARE A HALF TRILLION-DOLLAR SUBSIDY FRONT FOR THE OIL INDUSTRY TO HELP BURN “EXTREMELY TOXIC” SLUDGE FROM REFINERIES

The maritime commodity trade is worth $20 trillion per year. Over seven billion people would go without basic goods if ships were to stop plying the oceans even for a couple of weeks.

When the COVID pandemic hit earlier this year, cargo ships continued to keep the world fed, clothed and warm at enormous personal hardship and risk to seafarers and shore workers.

It is true that ships burn about seven percent of all crude oil production in the world as marine fuel.

This works out to about 320 million tons of fuel oil each year. In our anxiety to decarbonize shipping, it is so easy to forget that global cargo fleet delivers 1.9 billion tons of goods to the world – and use far less fuel per unit of work than any other form of transport.

This fuel switch has increased the CO2 emission per btu to the point that it is on par with gasoline and diesel.

But unlike gasoline, marine fuels have no benzene or aromatics.

From a scientific context, it is a little difficult to link marine fuels with “extreme toxicity.”

ASSUMPTION 7: A CARBON TAX OF $75 PER TON SHOULD BE LEVIED ON PANAMA, LIBERIA, AND THE MARSHALL ISLANDS

Logically, each person from these consuming nations is liable to pay the so-called carbon tax, should it be levied.

The U.S., Canada, Europe, Australia and Japan constitute the bulk of developed nations.

They currently constitute 17 percent of global population but consume 34 percent of these goods, according to UNCTAD statistics.

These consuming nations are the ultimate carbon sinners, not the vehicles that deliver them – and certainly not the nations that register the vehicles.

SHIPPING IS KEY TO FREE TRADE AND GLOBAL DEVELOPMENT

Over the past three decades, there has been a slow and inexorable shift in the pattern of global per capita production and consumption of goods and services from developed economies to China, the Far East and India.

The instinctive response in developed economies has been to apply the brakes on globalization.

In this volatile and uncertain world we live in, most forms of disruption threaten sustainable development.

Geo-political strategies camouflaged in the guise of ecology are the greatest threat to free trade and sustainability. Shipping is seen through this prism as the ultimate symbol of globalization. Pollution.

Despite its criticality, shipping has become an easy target for an eco-political lobby that is losing credibility in the aspirational regions of the world.

Ships and crews are multinational in character. Well-meaning and well-informed stakeholders should support and challenge them to stay safe and healthym and help them when they lose their way and founder or beach.

It is self-destructive to blame them because they strayed into our waters, intending only to bring us food and goods from afar.

This news is a total 2168 time has been read
Tags: Questioning Media Assumptions About the Shipping Industry