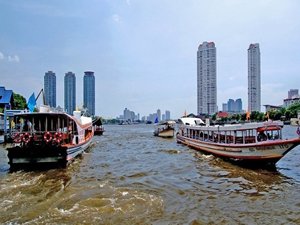 On Sunday evening, a river cruise boat sank on Bangkok's Chao Phraya River. All 60 passengers and 15 crewmembers aboard were safely evacuated to a nearby pier.

According to local media, the three-deck dinner cruise boat High Season 1 picked up a company of Chinese and Thai tourists at the Ramada Plaza hotel along the Chao Phraya River, south of downtown Bangkok. At about 2000 hours, while under way near the Phra Pok Klao Bridge, the vessel took on a list. The operator decided to moor at the nearest private pier and offload the passengers in case the vessel should lose stability.

No injuries or damage to infrastructure were reported. The local marine department has been contacted to arrange for salvage, and an investigation into the cause of the sinking is under way.

The accident occurred shortly after another passenger vessel sinking in Thai waters. On Saturday, the car ferry Raja 4 went down off Koh Samui Island in the Gulf of Thailand, leaving one dead and five missing. An additional body was located on Monday, and a team of 10 foreign diving instructors has joined in the search for the four people who are still missing.

The Raja 4 went down in rough weather, and as a precautionary measure, provincial disaster response officials have temporarily suspended all nighttime ferry services to Koh Samui and other neighboring islands.

This news is a total 1055 time has been read
Tags: Quick Mooring Allows 75 People to Safely Disembark Sinking Cruise Boat