Rail freight volumes at Ningbo-Zhoushan port up 15% in H1 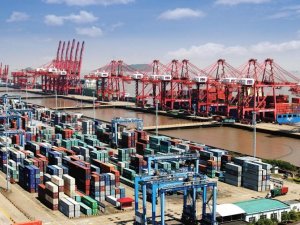 In the first half of this year, Ningbo-Zhoushan port posted 444,000 teu sea-rail transportation volume, an increase of 15% year-on-year.

The port’s rail connections have been expanded to 54 domestic cities.

Container transportation at Ningbo-Zhoushan port sharply declined in the first quarter due to the outbreak of Covid-19 pandemic. The status improved starting from the second quarter with the production resumption.

This news is a total 949 time has been read
Tags: TERMINAL OPERATORS, CONTAINERS , ASIA , RAIL FREIGHT

America’s Largest Port Starts COVID-19 VaccinationsThe shots were a welcome relief for the International Longshore and Warehouse Union (ILWU) members who snapped up the appointments in about 20 minutes.

Stranded Syrian Seafarers Given Nod to Sell Ship at Mombasa PortFor close to 16 months, 11 seafarers have been stuck at Mombasa Port, depending on the kindness of well-wishers for survival after their employer abandoned them.

COSCO Ports takes stake in Saudi Arabian terminalChina's COSCO Shipping Ports (CSPL) has entered into an agreement with the founding shareholders of Saudi Arabia's Red Sea Gateway Terminal Limited (RSGT) to acquire a 20 per cent stake in the terminal which is located at Jeddah Islamic Port.