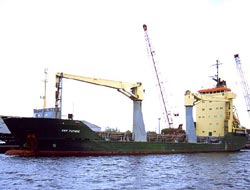 Somali pirates have released a Danish cargo ship and its mainly Russian crew after a ransom payment was parachuted to the hijackers.

Somali pirates have released a Danish cargo ship and its mainly Russian crew after a ransom payment was parachuted to the hijackers.

Somali pirates have released a Danish cargo ship and its mainly Russian crew after a ransom payment was parachuted to the hijackers, more than two months after it was seized, the owner said Friday.

The CEC Future was hijacked off Somalia's northern shores on Nov. 7.

The ship and its 13 crew members -- 11 Russians, one Georgian and one Estonian -- were released unharmed Friday after the ransom was dropped by parachute earlier this week, said Per Gullestrup, a top executive of Danish shipowner Clipper Group.

He declined to specify the size of the ransom, but added that such payments usually range between $1 million and $2 million.

The money was flown from Denmark to Djibouti in east Africa, from where it was transferred to a private plane, which dropped the ransom behind the ship on Wednesday, he said.

All crew members were physically unharmed "but they may have psychological scars," Gullestrup added. The crew would undergo a medical check before flying home.

"The seizure of both this and other vessels over the last months in the Gulf of Aden must serve to highlight the unacceptable security situation in the area," Gullestrup said.

He urged "the international community and the coalition forces to continue to work toward the protection of seafarers and the passage of free trade in the region."

A maritime watchdog said Friday that pirates seized an unprecedented 49 ships and held nearly 900 crew members for ransom worldwide last year, mainly due to the surging number of attacks off Somalia's coast.

Seafarers suffered 293 attacks globally in 2008, up from 263 recorded in the previous year, the International Maritime Bureau said in a report from its piracy reporting center in Kuala Lumpur, Malaysia.

Somali pirates were responsible for 111 of the attacks, most of which struck the Gulf of Aden, the London-based bureau said. Those attacks, aimed at hijacking vessels for ransom, peaked between September and November.

Attacks off Somalia accounted for 42 of the hijackings and 815 of the crew abducted, the report said. Other hotspots for brigands include Nigeria with 40 attacks last year and Indonesia with 28.

Somalia has not had a functioning government since 1991 and its lawless coastline is a haven for pirates. Multimillion-dollar ransoms have become one of the only ways to make money in the impoverished nation. The pirates' biggest prize yet, a Saudi oil tanker, was released earlier this month.

The International Maritime Bureau urged governments to maintain security patrols in their waters and said ships must remain vigilant against attacks amid the global financial downturn.

"With the world economy in its present uncertain condition, there is a possibility of piracy increasing," the bureau said in a statement.

Attacks worldwide have also grown more violent over the past year, the bureau said, with 11 crew members killed and 21 missing and presumed dead. The number of incidents in which guns were used nearly doubled from 72 in 2007 to 139 last year.

An international flotilla including U.S. warships has stopped many attacks off Somalia in recent weeks, but the area is too vast to keep all ships safe in the vital sea lane that links Asia to Europe.

Lt. Stephanie Murdock, a spokeswoman for the U.S. 5th Fleet based in Bahrain, said the U.S. Navy had no direct role in Friday's release of the Danish ship and had no comment.

This news is a total 726 time has been read