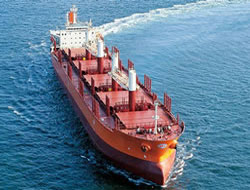 Continuing decline in dry bulk rates is worrying ship owners but for most medium-sized chartering and brokerage companies it represents an opportunity, says a leading industry figure.

Continuing decline in dry bulk rates is worrying ship owners but for most medium-sized chartering and brokerage companies it represents an opportunity, says a leading industry figure.

Owners have been reluctant to release their vessels at low rates but most are now beginning to accept market prices because of fears that the situation could worsen further.

"Medium-sized chartering companies whose clients are mostly low end are optimising the situation as they can now easily move clients' goods at low rates, which is giving them a chance to grow," MG Maghami,
Chairman of Dubai-based Simatech Shipping said.

"This situation is also a major opportunity for shippers to move their goods to various destinations at cheaper freight rates."

The year 2008 seemed promising for the dry bulk market in the first quarter, but rates have since fallen to levels last seen five years ago.

The Baltic Exchange Dry Index, which measures bulk freight rates on the busiest routes, has lost 87 per cent from its record high of 11,760 earlier this year due to a slowdown in demand from China, the global financial turmoil and the delivery of new vessels.

The global slowdown and a slump in manufacturing has led to a cutback in Chinese steel exports which in turn has led to a lack of demand for iron ore - sending prices crashing down.

Maghami said medium-sized companies with good cash flow would suffer least from the economic decline as they did not have to rely on financing from bankers, who have recently tightened credit.

"The container trade on the Middle East-Far East route has been affected by the global economic slowdown but the impact has been minimal compared with the global container industry''.

"Volumes on this route have remained stable but revenues have declined due to sliding container freight rates."

Maghami said while the Middle East shipping industry would be affected by the global economic crisis, cash reserves from the region's oil sales would continue to cushion it from major slides.

"The high demand for commodities in the region driven by the economic and construction boom will help to keep stability in the region's shipping industry," he added.

"However, serious port congestion problems on major Gulf ports, where my company operates, are adding to operating costs.

"There is an urgent need for expansion of all major ports around the Gulf to match the increasing demand for imports. Congestion at ports is a serious concern for the Gulf economies."

Simatech, which is expecting a 10 per cent revenue growth from its container business, is planning to expand into the Far East by December and also into East Africa to tap the growing market for imports in Africa.

Plans to link India to Mombasa Port in Kenya are being examined but the company is waiting for the global market to stabilise before taking any action.

Simatech operates 25 ships but hopes to enlarge its fleet when it expands into new markets. The company intends to finance its expansion programme from its own equity.

This news is a total 1000 time has been read