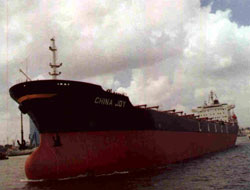 PANAMAX product tankers are ballasting out of the Atlantic to Middle East markets because of the fall in available oil cargoes in Europe.

Panamax product tankers are ballasting out of the Atlantic to Middle East markets because of the fall in available oil cargoes in Europe.

The supply of 60,000-tonne gasoline cargoes from European refineries has dried up because low prices are forcing them to store products, rather than export them to the US.

An increase in available product tankers in the Middle East now means charter rates will fall for long-range and medium-range trades, brokers said.

?In general we believe the decline in rates in the east of Suez [Middle East to Asia routes] market will continue for the next couple of weeks,? said Fearnleys in its weekly report.

Rates for product tankers taking 55,000-tonne cargoes from the Middle East to Japan, known as long range one trades, were down to W180 from W200 reported last week, the report said.

According to Baltic Exchange data, these rates are the lowest paid since May this year, and are down from highs of W360 seen in September for 55,000-tonne cargoes on a Middle East to Japan route.

Illustrating the falls was the fixture of the 74,999 dwt, 2004-built Torm Ismini for W180-W175 by Samsung and Total, to transport a 55,000-tonne cargo of naphtha from the Middle East to South Korea and Japan.

Fearnleys said tankers taking 75,000-tonne cargoes from the Middle East to Japan were around W155, a W15 point drop from a week ago.

The Atlantic market has been quiet, with only a limited number of fixtures reported. But brokers expected more cargoes as onshore tank storage capacity filled up.

?Refiners want to continue producing and filling their tanks, but there is only so much storage, so they will have to move their products soon. But this week there are a lot of ships out there and not too many cargoes,? said one London broker.

He said MR tankers transporting 37,000-tonne gasoline cargoes from Europe to the US were securing rates of W185.

Baltic Exchange data shows rates lower than this, with tankers taking a 37,000-tonne cargo from Rotterdam to New York securing rates of W187, which is equivalent to rates of $19,587 per day.

Rates for tankers transporting 38,000-tonne product cargoes from the Caribbean to the US were up W5 points to around W165.

This news is a total 927 time has been read