Rauma shipyard shuts down production after over 230 coronavirus infections 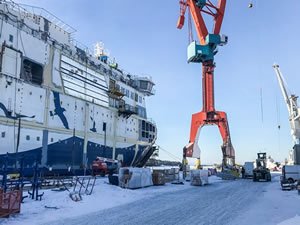 According to the City of Rauma, a total of 1,000 people have been tested.

It appears that the main factor that contributed to the widespread of infections were the shared living and transport arrangements for foreign workers employed at the yard.

The city authorities said they were working with the health agencies and the shipyard to create a plan that would enable gradual resumption of production starting from February 25.

The plan aims to establish health and safety requirements targeting eating, housing, and transport arrangements to prevent the further spread of the virus among workers.

It is not clear how the production schedule would be impacted by the shutdown. According to Rauma Marine Construction CEO, Jyrki Heinimaa, the completion of the yard’s Aurora Botnia ferry project could be delayed, Finnish Broadcasting company YLE reported.

Aurora Botnia, Wasaline’s new car and passenger ferry, was supposed to be completed and delivered in May this year.

Offshore Energy – Green Marine has reached out to the yard for a statement and is yet to receive a reply.

The city authorities said that the quarantine of those exposed to the virus would resume as directed.

This news is a total 9755 time has been read
Tags: Jyrki Heinimaa, City of Rauma , Rauma shipyard , shuts down production