Reach Spain in 4 days with EMES 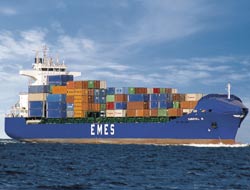 EMES reduces transit time and service intervals on sailings to Spain in order to meet increasing demand for volume. Shipments will now be delivered to Spanish ports in four days.

EMES reduces transit time and service intervals on sailings to Spain in order to meet increasing demand for volume. Shipments will now be delivered to Spanish ports in four days.

EMES has now made it easier to work with Spain, one of Turkey"s largest foreign trade partners. EMES has reduced the transit time for shipments to Spain from Turkey to four days, making a contribution to increased trade volume between Turkey and Spain by increasing the number of sailings per week.

Shipments in only four days, offered four times a month

EMES offers two services to Spain. The Spain A service will follow a Valencia/ Castellon/ Barcelona/ Thessaloniki/ Marport/ Haydarpaşa/ Valencia route. More rapid service is offered on this line by reducing the previous transit time of six days between Istanbul and Valencia to four days. Previously carried out once every nine days, the frequency has been changed to weekly. Consequently, foreign trade companies that choose EMES" rapid services will be able to ship their goods to Spain in a shorter amount of time. The Spain B service, will continue to offer weekly route of Valencia/ Barcelona/ La Spezia/ Salerno/ Pireaus/ Izmir/ Valencia with its increased capacity.

Turkish exports to Spain primarily include marble, white goods and textile products. Imports from Spain include shipments of raw materials and chemicals.

EMES began offering direct shipments to Spain in 2000. Arkas Spain, which represents EMES in Spain, was founded in September of 2005 in order to provide more rapid response to the continually increasing customer demand. Arkas Spain"s offices in Valencia and Barcelona also offer domestic transport and storage services. Arkas Spain"s expert team provides support for Turkish exporters and importers, while also offering Spanish exporters with dependable shipment of goods to many ports in the Black Sea and the Mediterranean.

This news is a total 1861 time has been read