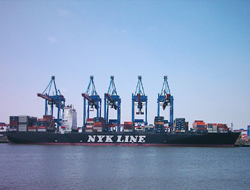 Pointing to the impact of higher bunker prices, the company said fuel prices rose 26% to an average of $402.77 per tonne, compared with $318.77 per tonne a year earlier, cutting pretax profit by Yen29.4bn.

Speaking today NYK Lines managing director Makoto Igarashi said: "While a set of numbers showing higher yen rates and bunker fuel prices served as negative factors for us, a recovery in freight rates for both the container service and dry bulk cargo allowed us to absorb such negative factors and achieve our best-ever performance."

The firm could have been speaking for all three carriers when it said the record result followed ?unprecedented high levels of demand in the market for dry bulker transport as well as the recovery of freight rates for container transport and expanded fleet size?.

As a result, bulker operations saw a 32.7% rise in revenue to Yen1,039bn to retain its position as the biggest contributor to group revenue. Operating income from bulk shipping climbed 73.8% to Yen178.4bn.

Mr Igarashi said: ?Cost cuts and a levy on bunker surcharge also contributed to the turnaround" in the liner division. He thought Asia-Europe routes would continue to buoy the container trades despite a looming downturn in parts of Europe. "Given solid demand, the recovery in freight rates will continue mainly for the European route," he said.

Bulker operations remained the cornerstone of the group after revenue from the sector rose 30.2% to Yen1,072.2bn while operating income soared 74.5% to Yen268.6bn.

The firm said longer voyages and port congestion in Australia contributed to the increase in dry bulk rates, while a robust market supported the petrochemicals business buoying the liquefied natural gas fleet. The car carriers business saw higher profits as a result of cross trade business in the Atlantic.

The carrier said the outlook for the bulk market, including dry, wet and gas, is expected to stay strong, but it plans to review rate levels in the container shipping sector and rein in costs. The company has predicted a bunker price of $580 per tonne this financial year.

But the net profit figure was slightly down from the Yen84bn forecast the company gave in January largely as a result of higher than predicted bunker prices.

K Line"s logistics business saw a modest 3.3% rise in operating revenue to Yen131.3bn although operating income edged down 0.8% to Yen13.7bn as a result of the shift of cargo from air to ocean transport.

K Line has projected a net profit of Yen78bn for the year to March 2009, down 6% amid uncertainty over dry bulk rates after the Beijing Olympics and higher overall costs. Revenue is forecast to grow by just 1% to Yen1,340bn, while bunker costs are forecast to rise to an average of $520 per tonne.

This news is a total 1134 time has been read