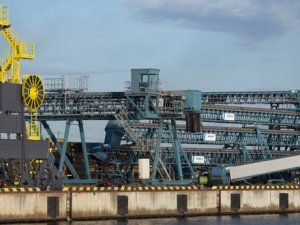 The peak season for grain handling started at the Port of Riga in August. Grain is handled all year round, but most activity takes place after the August harvest.

According to current data, more than 200 thousand tonnes of bulk grain were shipped from the port in August, which is the highest number this year and historically one of the highest to date.

This year, the grain harvest in Latvia and neighbouring countries is much better than initially expected: according to Latvijas Dzelzceļš, by the end of August, 3,000 railway cars with grain were transported instead of the 2,000 cars planned. This has resulted in more grain handled by terminals at the Port of Riga. “We estimate that this year we will handle 20% more grain that the previous year, or 350 to 400 thousand tonnes of grain, explains Ēriks Cešeiko, Chairman of the Board, KS Terminal.

Edgars Sūna, Deputy CEO of the Freeport of Riga, indicates: “According to current data, during the first eight months of this year the port has handled more than one million tons of grain, which could be approximately 20% more than year on year.” Approximately half of this grain is produced by Latvian farmers. A large part also comes from Russia and Lithuania. “We see Belarus and Ukraine as potential markets for handling and shipment of agricultural produce,” continues Edgars Sūna.

Grain has become increasingly important in the transit sector, and port operators adjust quickly to these market developments. At the moment, 12 companies handle grain at the Freeport of Riga. Infrastructure for handling and storage of agricultural produce has also developed rapidly. New warehouses are built in terminals, operators continue to expand their businesses, and new players enter the market.

Of late, KS Terminal, one of the largest grain handling operators at the Port of Riga, has invested two million euro in the construction of a grain warehouse, and more than three million- in the construction of railway access tracks and loading machinery. Ēriks Cešeiko, Chairman of the Board: “In future, we plan to make handling of grain fully automatic. To do that, we have to build an extensive conveyor system to the warehouse and then from the warehouse to ships. This would require an investment worth millions, but taking into account current developments in the market, it is considered a viable option.”

This news is a total 193 time has been read
Tags: FREEPORT OF RIGA, GRAIN, KS TERMINAL

Suez Canal gives vehicle carrier toll rebateIn the latest of a series of rebates on Suez Canal tolls vehicle carriers transiting the waterway eastbound from Northwest Europe to East Asia can apply for an 8% rebate. Employing the USMCA to Build Trade Between Florida and Mexico's PortsAs the new United States-Mexico-Canada Agreement (USMCA) goes into effect, organizations are exploring how it can contribute to growth in maritime trade.