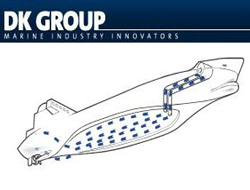 As oil demand comes under strain and prices soar, adding to the recessionary cycle, tighter control of ship transport ? which consumes 8.5% of all world oil to fuel its almost 100,000 vessels ? could reduce oil consumption by millions of barrels a day.

As oil demand comes under strain and prices soar, adding to the recessionary cycle, tighter control of ship transport ? which consumes 8.5% of all world oil to fuel its almost 100,000 vessels ? could reduce oil consumption by millions of barrels a day.

A mandatory speed reduction of 20% across the global shipping fleet would equate to a 40% reduction in fuel demand, or a cut of over 2.5 million barrels of oil a day.

Shipping, which transports 90% of all goods, has traditionally transited the world's oceans at full throttle, often leaving goods idle for days at their destination port.

A 20% slowdown would mean that ship operators could save almost $100 billion per year in fuel costs ? while reducing 450 million tonnes of CO2 per year (compared to the aviation industry's 600 million tonnes CO2). A phase-in slowdown of 5% per quarter across the fleet could mean the savings are realized within as little as 18 months.

The UN body that regulates shipping, the International Maritime Organisation (IMO), refer to current efficiency technology, such as twin propellers, as "voluntary".

The shipping industry consumes 369 million tonnes of bunker fuel each year, equivalent to 7.29 million barrels a day or 2.66 billion barrels per year ? 8.5% of global oil supplies.

According to research commissioned by the IMO, technologies, including twin propellers and hull design efficiencies, could reduce fuel consumption and oil usage by "30-40%".

One of the world's leading shipping companies, APL was recently reported saying that shipyards can build ships designed for greater efficiency and put in engines which burn fuel more efficiently and pollute less, but fail to take the initiative to do so.

According to DK Group : ?If slow steaming is combined with technologies we will see drastic reductions that can reach over 50% in reduced fuel usage and costs, which equates to 4.37 million barrels a day.

When compared to current ship fuel use levels, it means saving almost half of the production in Saudi Arabia, which given global demand for oil represents  a huge saving?.

Shipyards should be encouraged to engage further with owners, shippers and tech companies to offer new thinking as part of new build programme ? technologies can pay ship-owners back in months in many cases. This sentiment is supported by shipping companies such as APL

With current high oil prices, just a 5% speed reduction will lead to a 10% fuel consumption saving, applied to the global ocean-going fleet (as seen by vessel slowdown) would save750,000 barrels of oil per day entering market as ship fuel. As the Saudi"s and others struggle to meet global oil demand, this is a significant number

The suggested "30-40% fuel saving, suggested by IMO working group to BLG (attached), would mean reducing global oil demand by between 2.25 (30%) and 3m (40%) barrels per day. These figures to not include vessel slowdown and the likes of ACS and ABB counter rotating propeller technology.

Distillates, or clean fuels, encouraged as the fuel of the future to reduce SO2, Nox and PM, will emit more CO2 indirectly (as much as 60% more - if applied to current refining network) and cost 2-3x as much as fuel oil as demand for clean fuels is squeezed and shipping is forced to compete with cars, trucks, utilities etc

This news is a total 754 time has been read