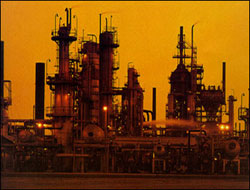 China's daily refinery output rose to its highest in four months in February.

China's daily refinery output rose to its highest in four months in February.

China's daily refinery output rose to its highest in four months in February, while the decline from a year ago narrowed as slowly improving demand and easing inventories encouraged oil firms to step up output. China's refineries including leader Sinopec Corp processed 25.8 million tonnes or 6.73 million barrels per day of crude oil in February, the National Bureau of Statistics said on Thursday, the highest rate since last October. That's down 2.3 percent from a year ago on a daily basis.

January throughput ran at 25.77 million tonnes, calculations based on official data showed, about 9 percent below January 2008 and its sharpest fall in more than 7 years, although that may have been distored by the Lunar New Year holiday. In the first two months of the year, total throughput fell 6.9 percent.

Coupled with a steep 15 percent cut in crude imports last month, the lower refinery output suggested refiners were finally drawing down inventories of both fuels and crude after months of lacklustre fuel demand in the world's second-largest consumer.

Refiners cut operations sharply in the fourth quarter of last year as inventories piled up and oil demand was hit by the worst global slowdown in nearly a century, causing the first contraction in three years.

But the improved February rate supported mounting evidence that runs are gradually rising as seasonal demand kicks in, and thanks to a new pricing regime that guarantees a profit margin.

"Now refineries are enjoying fat margins, and with farming season soon to start and some signs that consumer demand is ticking up, oil firms are set to raise further productions in March and April," said Liu Bo, oil analyst at Guojin Securities.

Coupled with data showing strong loan growth and improved manufacturer sentiment, the figures may provide support to oil markets waiting for any sign of an economic turnaround.

Oil prices rose 75 cents to $43.08 a barrel on Thursday, rebounding from a 10 percent two-day slump.

Liu estimated that state refiner Sinopec Corp and PetroChina were reaping 600-700 yuan in February for each tonne of gasoline and diesel sold at the current government-set pump rates, based on an average import crude cost of just over $40 a barrel.