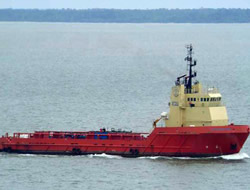 In an emailed statement today from the Movement for the Emancipation of the Niger Delta, a.k.a MEND, the Americans kidnapped from the Edison Chouest-owned supply vessel C-Retriever were released last week after an alleged $2 million cash ransom had been

This appears to be the first time that specific details of a ransom payment have been made public as the result of a kidnapping incident off Nigeria, although considering this information was sent by MEND, it could be somewhat truthful, or it could be a complete fabrication.

MEND notes that the hostage situation “ended on a happy note” and they claim to have in some way influenced the positive outcome. Furthermore, they note that the ransom payment was allegedly paid in large part from the Nigerian Maritime and Safety Administration Agency (NIMASA).

gCaptain sources note that nearly everyone in the Niger Delta, including the military, is on the take in some way, shape, or form, so MEND’s claim today that the majority of a $2 million ransom payment was made by a Nigerian government agency puts in further doubt the validity of their statement.

It’s likely that the entire ransom was paid either directly from Edison Chouest, or by a Kidnapping and Ransom insurance company which, according to gCaptain sources, sailors working in the area subscribe to.

The only thing in the emailed statement that seems reasonable is the $2 million ransom figure, although it might be surprising to the families of the kidnapped victims who were allegedly told by the FBI that the ransom would be in the $10,000 range.

Beyond the crap fed to the media outlets by MEND, we find it unusual that Edison Chouest has not released any of the details surrounding this incident, and also that none of the victims have spoken to the media.

Shortly after the kidnapping occurred, we spoke with a family member of one of the kidnapped victims and he was absolutely dead set on speaking to every possible news network following their safe return. Apparently their families have been convinced otherwise- that speaking about this issue is not in their best interest.

This news is a total 1355 time has been read