Removal of Fuel Oil from Stellar Banner Kicks Off 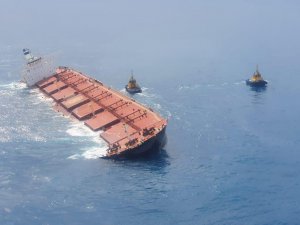 The operation to remove fuel oil from the heavy listing iron ore carrier Stellar Banner has officially been launched.

Salvage teams, led by Ardent and OceanPact, are set to remove approximately 3,500 tons of fuel oil to a receiving vessel.

According to the plan disclosed by the Brazilian Navy, the vessel will be positioned next to the wreck and connected to the stricken bulker to receive the fuel oil.

As informed, a helicopter and an airplane will monitor the operation, with the support of environmental specialists.

The navy has assigned 255 military personnel to support the operation. Offshore supply ship Iguatemi and Hydroceanographic Ship Garnier Sampaio, four vessels from the Port of Maranhao and several vessels with oil containment materials on board have also been dispatched to the scene together with a drone with a thermal camera.

To remind, the giant ore carrier, owned by Polaris Shipping from Korea, ran aground and developed a heavy list on February 24, 2020, some 100 kilometers off the coast of São Luís, in the state of Maranhão, Brazil.

The ship experienced bow damage that led to its grounding. The 20 crew members were evacuated from the vessel and there were no reported injuries to the crew.

This news is a total 341 time has been read
Tags: Oil Removal, Salvage, Stellar Banner.