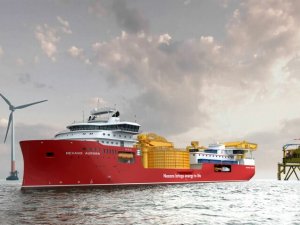 Starting in 2021 to support the global drive for clean energy, Paris-based cable and fibre-optic industry company Nexans will operate Nexans Aurora, a new generation cable-laying vessel that will be capable of operating worldwide either near-shore or in deepwater to install large volumes of submarine high-voltage DC and high-voltage AC cabling systems.

“The construction of this new cable-laying vessel is a fundamental milestone in our commitment to cleaner energy,” said Nexans chief executive Arnaud Poupart-Lafarge. “For many decades, Nexans has been acting for energy transition and sustainable development. The cutting-edge technology of the new ship will enable Nexans to support countries in their development of the unlimited potential of renewable power generation,” added Mr Poupart-LaFarge.

The technology for the Nexans Aurora is being designed, engineered and built through a global effort. At Poland’s Crist shipyard in Gydnia, Nexans vessel operations manager Knut Flange pushed a button initiating the cutting of the first steel for Nexans Aurora. In April, Crist began assembling the first grand blocks for the nearly 150-m-long hull. Once the Polish yard builds the hull, final engineering, outfitting and system integration, equipment preparations, testing, and sea trials will be carried out at Ulstein Verft, Ulsteinvik, Norway.

An ST-297 CLV design from Norway’s Skipsteknick A/S, Nexans Aurora is a dynamic positioning class 3 capable cable-laying vessel that will be capable of power cable laying, including bundle laying, cable jointing and repair and cable system protection and trenching. UK-based MAATS Tech, which designs bespoke carousel systems, is supplying a full cable-lay spread on the vessel, including a 10,000-tonne concentric carousel that will have the capability to process two cables simultaneously, a capstan holdback, two deck tensioners, lay wheels and integrated control system. It will have a cable capacity of 10,000 tonnes and a fibre optic basket of 450 tonnes.

Nexans Aurora will be delivered in the midst of a surge in offshore wind. Brussels-based Global Wind Energy Council (GWEC) estimates offshore wind will account for about 18% of total wind energy capacity by 2023, up from 9% in 2018. Overall, offshore wind will have an annual growth rate of 8% from 2019 to 2023.

A report by the US Department of Energy estimates that 44 GW of new capacity will be installed between 2019 and 2024, with total installed global capacity of 63 GW by the end of the forecast period. The UK and China will dominate near-term deployment, with Germany, the Netherlands and Denmark continuing to approve new projects to meet their national policy goals for renewable energy — all of which will need submarine power cable systems and solutions to be connected to the grid.