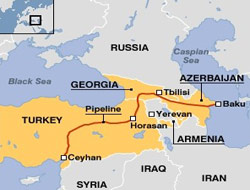 Repairs have started in Turkey on the fire-damaged Baku-Tbilisi-Ceyhan (BTC) oil pipeline, but it is not clear when the line will reopen, a source from a Turkish state Botas pipeline company told Reuters on Thursday.

Repairs have started in Turkey on the fire-damaged Baku-Tbilisi-Ceyhan (BTC) oil pipeline, but it is not clear when the line will reopen, a source from a Turkish state Botas pipeline company told Reuters on Thursday.

A senior energy ministry source said an initial assessment indicated the damage to the pipeline was not great and that repairs may take less than an earlier forecast two weeks. World oil prices rose last week after the blaze, and estimates that it could take up to two weeks to get the pipeline on stream again.

"Digging has begun to assess whether there has been damage to the valve on the pipeline, which is very important in determining when the pipeline will be reopened," said the senior level source at Botas.

The source told Reuters it would take another two days to clarify when the line could reopen.

"We are working to determine the extent of the damage on the line, it is still impossible to say when repairs will be complete," he said.

According to the method chosen for the repair of the pipeline the process could take one or two weeks or even longer, a Botas source told Reuters last week, but the energy ministry source gave a fresh assessment.

"It is not possible to give a specific date but the repairs of the line will not go on into September. They may be completed in less than the envisaged two weeks," the source told Reuters.

The fire was a result of an explosion in eastern Turkey late on Tuesday last week.

Kurdish separatists claimed responsibility for the explosion and said they would carry out more attacks on economic targets inside Turkey. The source from Botas said it was still too early to determine whether the fire was a result of sabotage.

The pipeline normally carries Azeri oil which is high quality and commands a premium.

The $4 billion BTC pipeline can pump up to a million barrels per day, the equivalent of more than 1 percent of world supply, from fields in the Azeri sector of the Caspian Sea to Ceyhan on the Turkish Mediterranean coast.

This news is a total 1194 time has been read