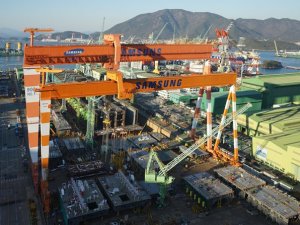 Up to ten other workers are reported to have sustained minor injuries in the incident at the Geoje yard that occurred on Monday, May 1st.

According to the report from the Korea Herald that cited police officials, two cranes collided, causing a structure to fall from one of the cranes, from up to 60 meters of height, onto a ship under construction.

As informed, operations are underway to rescue potential victims that may be buried at the site following the 32-ton crane’s collapse.

The cause of the incident is yet to be determined.

This news is a total 1066 time has been read
Tags: Report: Five Killed, Dozens Injured in Crane Collapse at Samsung Heavy Industries