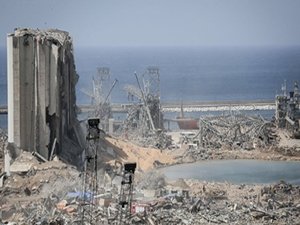 The find comes just weeks after a massive ammonium nitrate explosion leveled the central port area and destroyed much of the city's waterfront, killing nearly 200 people.

The Lebanese Army has discovered more than 140of potentially explosive ammonium nitrate at the Port of Beirut, according to the local Daily Star. The find comes just weeks after a massive ammonium nitrate explosion leveled the central port area and destroyed much of the city's waterfront, killing nearly 200 people.

According to the paper, engineering regiment commander Col.

The potentially explosive cargo totaled 4.35 tonnes in 143 containers at the port's customs division, and it had reportedly been in storage in Beirut for at least 15 years.

This hazardous discovery follows weeks after the massive blast caused by explosives-grade ammonium nitrate that had been stored on the port's silo pier since 2014.

The 2,750-tonne cache arrived aboard a Russian-operated freighter in 2013, and when the vessel was detained over unpaid fees, the cargo was seized and never left the port.

It detonated on August 4 in a fire that was likely sparked by welding contractors.

At the port complex, a World Bank survey team has catalogued seven shipwrecks and a long list of damaged infrastructure assets.

These include the 120,000-ton grain silo, which contained 15,000 tons of grain; 200 meters of quays; navigation channels and berths; the Customs and Ministry of Agriculture buildings; warehouses with a total area of about 160,000 square meters; cargo handling equipment; 373 full containers; and the port's sanitary-phytosanitary facilities.

25 people have been arrested in connection with the explosion, including Lebanon's head of customs and the former head of the Port of Beirut. Lebanon's cabinet has resigned following street protests and international pressure, and the government of President Michel Aoun is in negotiations on forming a new administration.

The task is made especially challenging by Lebanon's ethnically divided centers of power; since the end of the nation's civil war in 1990, political power and patronage opportunities have been split between the former warring factions with a priority on maintaining peace, not on ensuring an efficiently-functioning civil administration.

This news is a total 3284 time has been read
Tags: Port of Beirut , Lebanese Army